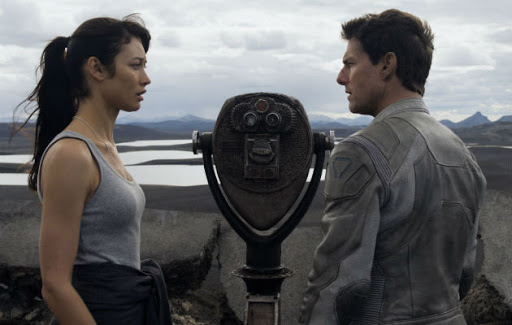 Oblivion is a disappointing slice of mainstream science fiction cinema that meanders aimlessly for little over two hours. I haven’t much noteworthy to comment about this underwhelming studio project. Nonetheless, mainstream escapist genres such as science fiction have this innate propensity for allegorical pluralistic reinterpretation that can thankfully on some occasions salvage the cinematic dignity of those involved. Robin Wood was one of those critics that had this capacity to read between the lines of mainstream cinema and although I am weary of applying such a noble approach to a film like Oblivion since it is such a tiresome affair, I could not help but read into the film in terms of a latent socio-political subtext concerning drones, insurgents and Pakistan. What I am saying may at first seem a little far fetched but it was the ending to Oblivion, the one in which two suicide bombers defeat the master controller in the skies, that got me intellectualising the following hypothesis; what if Jack Harper (Tom Cruise) and the Scavs (code word for troublesome insurgents) are in fact an allegory for a real and potential insurgency that has appeared in Iraq and which may in fact emerge on the Afghan-Pak border which has claimed the lives of so many innocent civilians in drone attacks orchestrated by Obama and company. If I was to take this allegorical interpretation to its fruition then a source of validation may lie in the film’s anti-drone ideology.

In the film, Harper is told by his superiors that the drones which he spends his days repairing are killing Scavs to protect humanity. In truth, the drones turn out to be machines controlled by an alien life form who have been programmed to kill humans. Drone attacks have become quite common in Pakistan and is an ongoing source of controversy that will inevitably be associated with Obama’s legacy. America’s war by proxy conducted criminally and immorally from the skies by unmanned drone technology is not only a cowardly form of murder but seeks to sanitise death as guilt free for the hegemonic perpetrators. Such a precedence exists in Oblivion with the drones targeting innocent civilians including women and children. However, the film offers a fantasy wish fulfilment in which a sympathetic rag tag band of human survivors come together as a mini insurgency, retaliating against the drones. Is the film covertly advocating the right to self defense as an accepted norm given the war like circumstances? If so, then it is an ideological proposition that would only come about through an oppositional reading of the film situated within a wider geopolitical context. The reading of an insurgent ideology is complicated by race as most of the insurgents are white aside from the tokenism of Morgan Freeman. Had the Scavs been more racially diverse and visibly so then an insurgent reading would have been much more explicit. It is the case that mainstream genres especially science fiction are open to endless allegorical interpretations and perhaps then Oblivion can lay claim to being Hollywood’s first anti drone film. Too bad the film is barely competent.