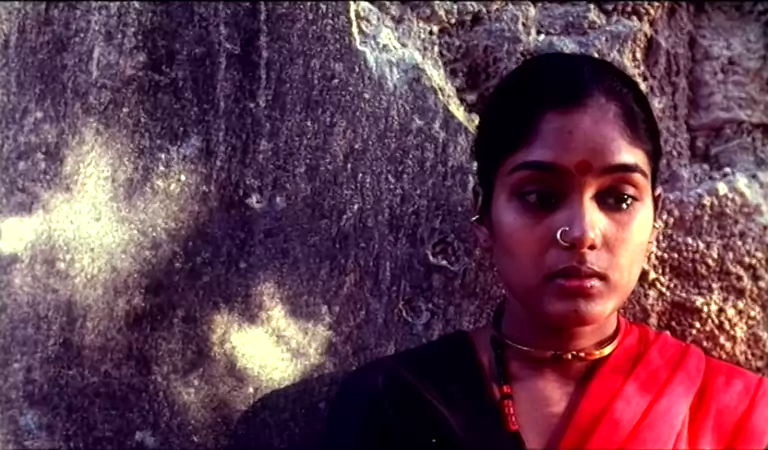 The story of Daasi takes place in 1925 colonial India when the region of Telengana was under the rule of the Nizam. The powerful and vicious landlord who reigns over the small village is Jayasimha Rao (Bhoopal Reddy). One of the significant aspects of Parallel Cinema was the resistance it brought to dominant narratives, disrupting traditional gender paradigms that had become established over time; carving out new spaces for women and female subaltern agency that Indian cinema had not seen before. Films like Maya Darpan (1972), Ankur (1973), Umbartha (1981) and Daasi (1988) constitute a kind of unconscious resistance that was working collectively to redress the gender disparity, although much of this has to be approached cautiously considering many of the films were directed by men and therefore one could argue these films tend to replicate a dominant point of view they are supposedly trying to disrupt.

Nonetheless, Telugu director B. Narsing Rao’s story about female enslavement feels like the flipside of Benegal’s Ankur since it takes an altogether oppositional aesthetic approach to the archetypal Parallel Cinema theme of feudalism, opting for a measured and sparse approach that is effectively a character study of Daasi (Archana), an impoverished, lower caste woman sold into bondage for twenty rupees when she was a young girl. Daasi is confined to the mansion and sexually exploited by the landlord. Rao seems particularly interested in exhibiting the drudgery of Daasi’s daily chores and which steadily take on a ritualised status. Apurba Kishore Bir’s camerawork that glides across the courtyard of the mansion not only extenuates the claustrophobia and imprisonment experienced by Daasi but also illuminates the spaces of the mansion with a wonderful texture through the shards of light, unusual reflections and doorways.

The terrifying scream that rings out at the end, that of Daasi who is being forced to abort the child of the landlord, is marked by emptiness and pain that seems to become swallowed up by history, remaining suppressed in the past, a scream that we would rather not confront. It is a scream of exploitation, bondage and the beleaguered masses that relates the inequities of power that Parallel Cinema was able to articulate consistently in many films. Released in 1988, Daasi won five national film awards and is considered to be one of Rao’s best films.