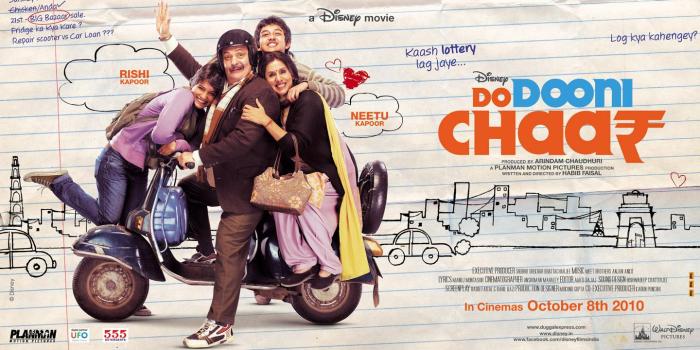 It was refreshing to come across what is clearly one of the stronger mainstream Indian releases of the year. I have never really been a big fan of Rishi Kapoor – I thought the sweaters he wore in so many of the terrible films he made in the eighties were simply inexcusable and unflattering to his sizable and noticeable paunch. Unlike Shashi Kapoor and Raj Kapoor who will be remembered for their choice of films, though Shashi has also done his fair share of stinkers, Rishi Kapoor’s cinematic status as a film star could be narrowed down to the way in which Bobby and Karz have been immortalised by mainstream Indian cinema today. One could argue that the real problem faced by aging Indian film stars such as Amitabh Bachchan, Rishi Kapoor and Dharmendra is that you either continue in the regressive action mode or try to sustain a career as a romantic lead. Of course, in reality, the mainstream cannot simply accommodate such a dispiriting acting philosophy and the dearth of roles written for aging film stars means either an early retirement or the suicidal option of playing out a star persona that has lost it’s so called charm with audiences.

It was around about 2000 when Rishi Kapoor announced what was effectively his retirement from mainstream Indian cinema as a main lead – a wise move considering how awkward he appeared paired up against the likes of his much younger female co stars including Madhuri Dixit. Now, I don’t want to trash the acting reputation of Rishi Kapoor because what a film like Do Dooni Chaar in which Rishi Kapoor plays a down and out maths teacher Mr. Duggal proves is that casting is everything when pleading with audiences to suspend disbelief. Whilst he is not allowed to dominate the film, his star presence is important to the warmth with which director Habib Faisal depicts middle class India. I guess I was never convinced of Rishi Kapoor as an actor because he was probably miscast for most of his life; he never had the looks or the physique to be a leading man, nor did have great charisma. Another point to note is that Rishi Kapoor’s career in the nineties really came undone by the emergence of the Khan’s and similarly like Amitabh Bachchan he saw himself become overshadowed and also struggled to compete successfully at the box office. I’m not sure if he really had any significant box office and one could even argue that his presence in the industry was sustained largely through nepotism.

Over the last few years, Rishi Kapoor has re-emerged, reinventing himself as a supporting actor and his performance as the run down Mr Duggal, a patriarchal symbol of middle class aspirations, is the best I have seen from him. Do Dooni Chaar continues a trend of recent films including Khosla Ka Ghosla and Rocket Singh that use comedy as a vehicle to deal with the often forgotten lives of a frustrated Indian middle class. In this case, whilst weddings, education and adolescence are painfully explored, it is the ubiquitous symbol of the car that is used predominately to critique the crippling middle class anxieties brought to bear upon what is an apparently normal yet wholly dysfunctional family. Very much a family melodrama that takes its comical linage from the cinema of Hrishikesh Mukherjee and Basu Chatterjee in which eccentricities feel both habitual and normal, the under stated direction that Habib Faisal’s debut takes proves somewhat oppositional to the script work he has done for Yash Raj on such unmemorable films as Jhoom Barabar Jhoom. Ideologically, the central argument of middle class India attempting to sustain itself economically and socially is convincingly articulated through the under valued position of the teacher. Impressively performed, the film does remarkably well to steer clear off song and dance cliques whilst benefiting enormously from the real life husband and wife sparing of Rishi Kapoor and Neetu Singh. A minor criticism would be the ending to the film which smacks a little too much of wish fulfilment but still this is a minor quibble for a film that should have done so much better at the box office. 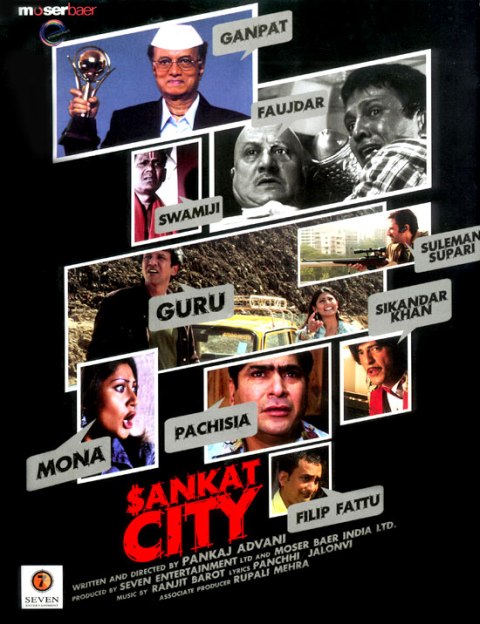 Written and directed by Pankaj Advani, Sankat City is a rollicking and unpretentiously inventive comedy caper that was released in the summer of 2009 to little commercial success. However, it was favourably reviewed on its initial release and I can see why it works so well as a reflexive postmodern take on mainstream Indian genre films. Sankat City could probably be placed alongside the likes of Rocket Singh and Oye Lucky! Lucky Oye! as superior examples of the comedy film. All three films seem to share a commonality with ensuring the more heightened elements involving scams are anchored by a likable set of characters. It is their existence on the periphery of society that allows in particular Sankat City to work out such social exclusion as a cathartic narrative in which triumphalism doesn’t come across as awkwardly misguided or riddled with sentimental cliques. Director Pankaj Advani manages to sustain interest primarily through an endless amount of energy, both in terms of creative ideas and also in a hilarious ability to poke fun at the the world of film making and the superficial genres it spawns. Both Anupam Kher as a playful gangster don and Kay Kay Menon (playing against type) as a small time thief deliver fine performances whilst the irascible Chunky Pandey shows up in a deranged 1970s style double role. Writer and director Pankaj Advani’s postmodern and stylised cinematic sensibilities seem to parallel that of his contemporaries including Dibankar Banerjee, Shimit Amin and Anurag Kashyap which suggests that it is possible to work within the parameters of the mainstream whilst remaining resolutely authorial and subversive. Sankat City is avaliable to buy on DVD and comes highly recommended as an example of the new wave? of Indian cinema.