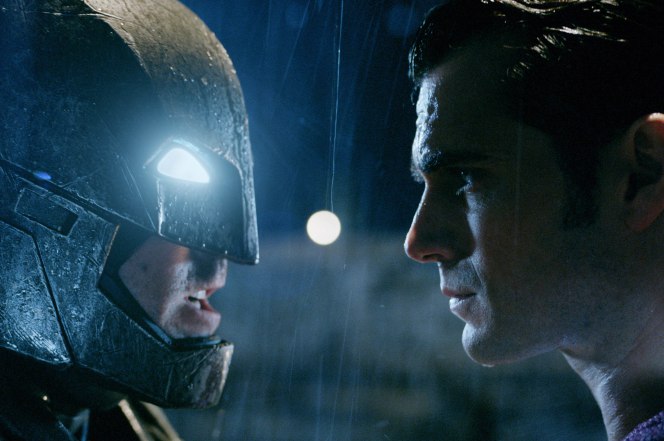 The imagination of disaster has been invoked with such banality and so consistently in the mainstream of American cinema that it has become a dreadful cloak with which to amplify nonsensical puerile conceptions. This has been made doubly worse by the way so many of these inane films co-opt the imagery of 9-11 into the very iconographic sentiments of the spectacle. Batman vs. Superman (BvS) claims to open with what appears to be a decentring of the comic book genre, an act of heroism adjudicated as antithetical to the reality from below. Snyder does decentre covenants, but not just Batman and Superman as cultural icons. He decentres an entire genre, the comic book film, to such an extent that by abandoning the past completely, BvS becomes an unremitting coda of photographic excess. Snyder explicates in the laziest of modes; a lurid, pulpy aesthetic register, beholden to a crass adjunct of shallow focus and slow motion that serves the prosaic purpose of authorial angst. Nolan took three films re-cultivating the image of Batman, overcoming a cycle of derisory works that had rendered Batman a source of postmodern ridicule. While Nolan’s Batman is definitive in many ways, Snyder imagines a Gotham that doesn’t even seem to exist, which is only referred to in conversations as a mythical space. Both Metropolis and Gotham are dreary colour coded worlds, half-baked visual afterthoughts. Nolan’s Dark Knight coding is a tough act to follow and while Affleck seems suitably cast in a novel anarchic avatar the final rendering in which he sizes up to Superman is a bloated, humourless affectation that sees Batman transform into a hulking Goth rhino. Even more joyless is Henry Cavill’s pitiful Clark Kent/Superman moniker, which is not only miserably inarticulate but also completely soulless.

Inevitably, the unmitigated concept of Batman vs. Superman is predicated on a high pitch mêlée of which Lex Luthor is the only one who understands the incredulous plot. Eisenberg as Luthor is a casting travesty. Not only is Eisenberg incomprehensible, spouting a litany of indigestible lines, but reimagining Luthor as a benign super nerd substitutes Machiavellian for a dull adolescence. Laurence Fishburne also pops up as part of the mandatory diversity/ethnic minority scenery, spouting austerity gibberish, Holly Hunter is literally eviscerated and a reluctant Jeremy Irons is unable to comprehend why he signed up in the first place. At one point in the film Batman has a dream in which he seems to be subjugated by ISIS while Superman hallucinates Kevin Costner is his dad. If these arbitrary editing incantations are meant to digress and create a discordant narrative style then it sadly aggregates to plain bewilderment. Bell Hooks has written about the ways in which some aspects/performers of rap music deal in a misogynistic, capitalist performance, a form of pugilistic eroticism. The pugilism Hooks talks of is very much inherent in the final third of BvS, but reduced to a tedious pornographic exhibition of DC’s grandiose superhero constructions, manifested spuriously in the anti-climactic monster mash. While pugilism runs wild, the eroticism is nowhere to be found, which is somewhat disappointing since the assertion of the erotic could have been the saving grace of Snyder’s misaligned enterprise. Instead, Snyder skips the main meal and settles for the dessert, leaving us with pugilistic tapioca.