Fan is facilely about the political and psychological chasm between stardom and fandom. On paper, this seems like a very tasty proposition indeed; especially considering SRK has not made a good film in quite a while. The doppelgänger, a ubiquitous motif, suited to the fragmented, interruptive form of popular Hindi cinema, is familiar to the star persona of SRK, an avatar that he has adopted on many occasions in the past, producing an ambivalent response to the say the least. A project as narcissistic as this one could only suit the self-aggrandizing star imaginings of SRK, a man who has literally disappeared into the pretentious vacuums of stardom. There was a time when SRK knew which projects to pick, and while Fan attempts to rectify this forlorn nostalgia for the SRK we once knew and respected as both a credible actor and likable star, film audiences desire to see him cast against type remains prescient. Whereas Salman Khan’s troubled stardom, augmented by recent intriguing films, notably Bhajrangi Bhaijaan and the forthcoming Sultan, has been somewhat in the ascendancy, SRK’s demise as an actor could have been prevented a long time ago. Fan certainly stakes a claim for a revival of sorts but even this film falls short of the kind of epic actorly comeback one expected from SRK. A central problem with Fan is the film’s shaky and chaotic narrative, forever moving from one situation to another with no real momentum or consistent stylistic impulse. What the film should have been about is that central relationship between star and fan, which unfortunately gets capsized by a commercial propensity to suture in set pieces, ironically enough permitting SRK to practice his over-recognised thrills for his real fans!

Why not excise the stylised edges, and just go for a really simple film style, one or two locations, and actually debate the politics of stardom in an open and earnest way. Unsurprisingly, the Yash Raj authorial studio stamp gets in the way of such utopian aspirations, explicating SRK’s stardom as a product of a globalized, disaporic imagining of Bollywood; justifiably so. In many ways, Fan is simply not edgy enough for a film that claims to do so from the marketing and promos. I was hoping SRK would be really pushed to the edge, not held ransom by consumerist mono-cultural devices such as Madame Tussauds. Alternatively, this could be read as a reflexive critique of the superficiality of stardom. Surprisingly, for a songless Hindi film, there are some pretty serious issues here with pacing. Fan emerges as an overlong chase film in which a man chases his shadow around the world, or double in the Dostoyevsky sense of the word. I guess the lengths to which SRK goes to reclaim and protect his stardom becomes a metonym for star power and also the anxieties film stars undergo when their star image is threatened especially from a devoted fan or the media.

But I assure you I am not trying to be reductive in my understanding of the film as there are some notable aspects to the film that did resonate with me including Gaurav’s grotesquely over-animated facial augmentations, the initial prison cell encounter between fan (Gaurav) and star (Aryan) which should have been replicated in the film’s narrative throughout, and of course, the morally abstruse denouement. In many ways, Fan is salvaged by an ending that we expect but once delivered sits uneasily with what we know about SRK’s ‘everyman’ public image, and the film finally and reluctantly questions the moral integrity of the film stars which populate the Bollywood filmic universe. As SRK looks on at his fans, the image of Gaurav coming back to haunt him, I could not help but think of Guru Dutt’s Kagaaz Ke Phool (1959), perhaps the greatest and melancholiest commentary on stardom that has come from Indian cinema, in which the star is held ransom to an idolisation that is both ephemeral and beguiling, masking an adulation that we all furtively crave. Fan may in fact be a very complicated study of stardom and only on a closer examination will we be able to determine if it stands up as an instructive postmodern parable of the contemporary Bollywood film industry. 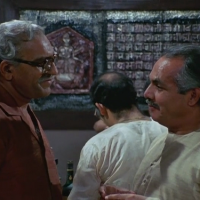