Animalistic may seem hyperbolic trying best to describe the raw essence of Sholay but the term animalistic makes sense when you recognise Gabbar Singh (Amjad Khan), the villain of the film, behaves in totality like a beastly allegory of nightmarish anxieties. Sholay is many things: a bandit film, an epic melodrama, an Indian western, the ultimate masala film, and homoerotic spectacular. Since the critical discourse on Sholay is so rich and pluralistic, I want to briefly focus on a singular edit, a cut that is arguably the most significant in the entire film. The narrative structure of Sholay is predicated on a key flashback unfolding midway that gives way to the intermission. Firstly, here’s what happens narratively before we get to the end of the flashback. 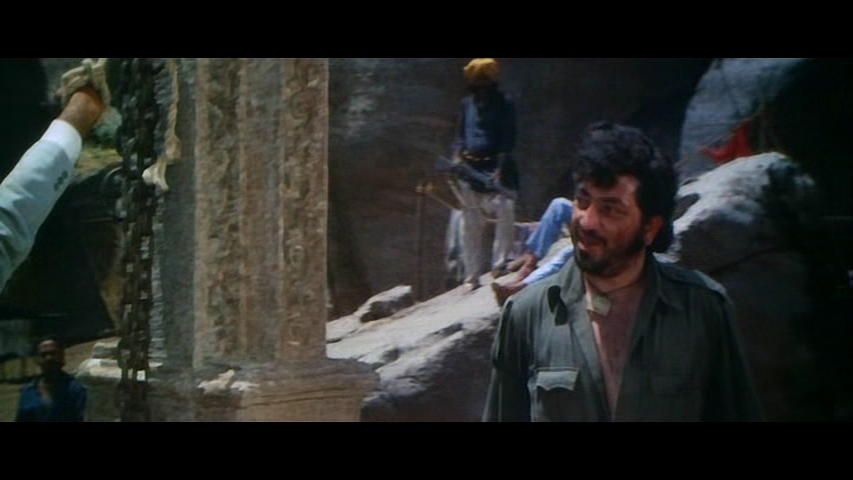 Holi celebrations in the village are disrupted by Gabbar and his men. At first Veeru (Dharmendra) and Jai (Amitabh Bachchan) try to ward off Gabbar but Jai is captured and surrounded by Gabbar’s men with the intention to massacre him. Veeru is unarmed but sees a rifle resting at the feet of Thakur (Sanjeev Kumar). When Veeru pleads with Thakur to use the rifle, Thakur ignores Veeru. Veeru is outraged by Thakur’s indifference. Luckily, Jai manages to disarm one of the men. Jai and Veeru band together, killing many of Gabbar’s men. Gabbar is forced to retreat but determined to exact revenge for the humiliating defeat. Having salvaged the dignity of the village, Veeru turns his attention to Thakur, accusing him of cowardice and berating him in front of the villagers. Veeru’s accusatory tone triggers an extended flashback told by Thakur, detailing a hostile rivalry between Thakur (the crusading police officer) and Gabbar (the marauding bandit). The flashback details critically that Gabbar escapes from a prison and wanting revenge he cruelly massacres Thakur’s family. An outraged Thakur foolishly rides into Gabbar’s camp but is captured. The next action by Gabbar is perhaps the most horrific, revealing a monstrosity, which haunts and scars Thakur. Taking two swords Gabbar maliciously quotes Thakur who once referred to his arms as a noose, which would hang Gabbar for his transgressions. Gabbar inverts the arrogance of Thakur’s word and amputates both of Thakur’s arms, fulfilling his thirst for revenge. 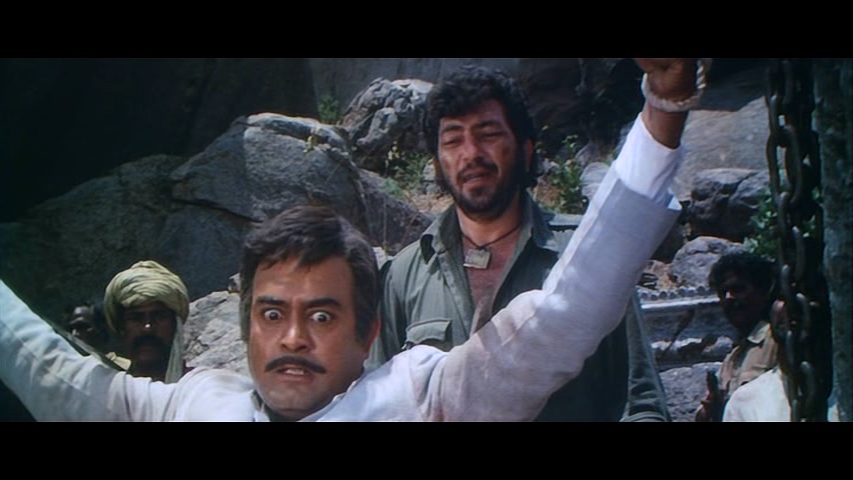 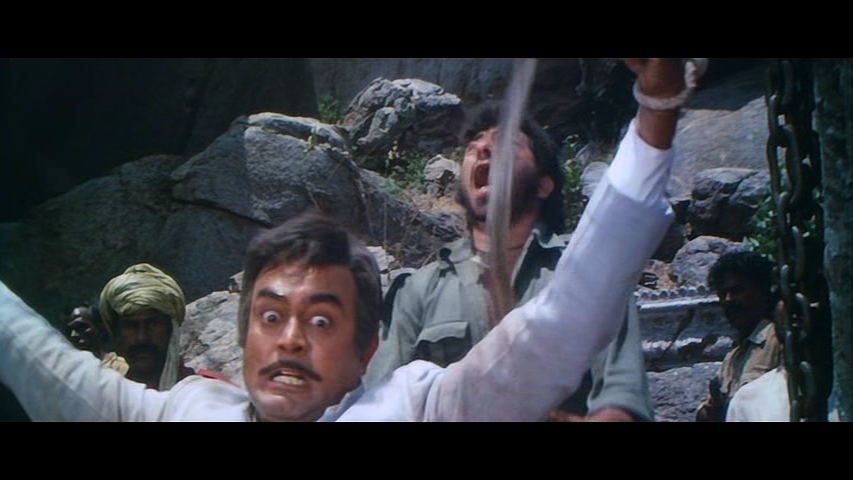 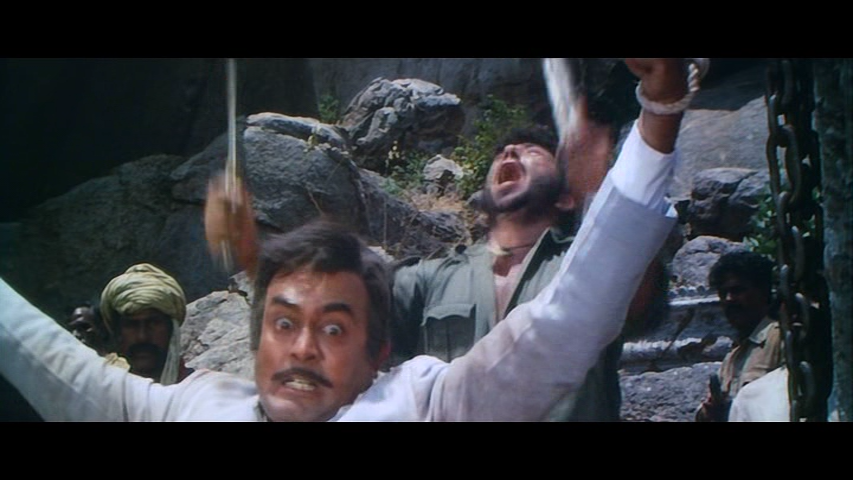 Showing the amputation would have been too grotesque so director Ramesh Sippy times the cut perfectly so that as Gabbar brings the swords down and across Thakur’s arms, we cut from Thakur screaming in the past (juxtaposed to Gabbar Singh’s terrifying Yeh haath hum ko de de, thakur!) to Thakur, a figure of trauma, in the present. Not only does the cut amplify what can’t and in a way shouldn’t be shown but the physical filmic edit becomes a metaphorical device. Metaphorically, the cut works to sever Thakur’s sense of history and collective memories while also reminding us the extent of his pain indescribably connects the present to the past. 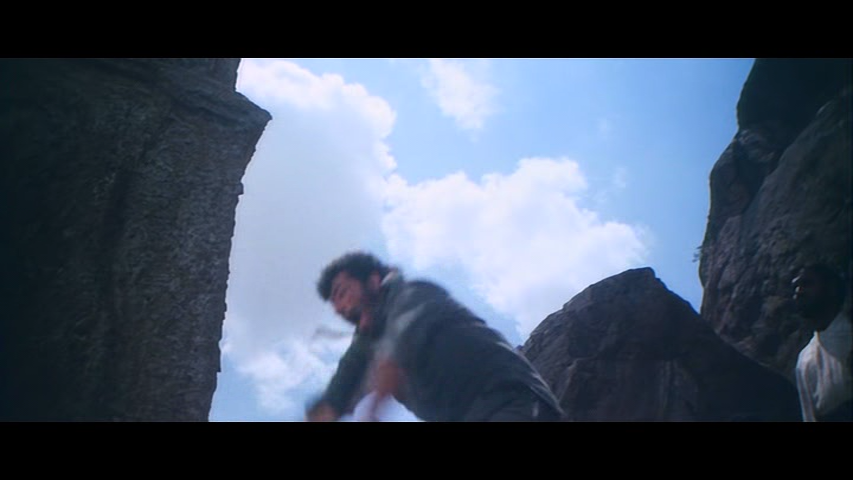 Intriguingly, the cut from Gabbar to Thakur in the present is more complicated than it first appears. Traditionally, such a cut would opt to begin the next scene with a shot of the character’s face as a means of orientating the audience and keeping in line with narrative linearity. Instead, the cut to the present begins unconventionally with a shot of Thakur’s legs and feet. At first, the fragmentation of Thakur’s body through this suggestive edit underlines his dismembered masculine state but more importantly, the implication here is that Thakur may have lost his arms but strength now resides in his legs and especially feet which will play a major role in the final sequences. Cinematically, this symmetrical composition is also necessary since we see Thakur’s shawl gently fall to the ground and thus preparing us for the shock reveal of Thakur with no arms. The impact of this shot is heightened with a fast dolly out from the Thakur’s face while his white clothes makes Thakur seem even more ghostly. Additionally, Thakur’s anguished facial expression reaches back into the past, a past from which Thakur has never been able to escape. In many ways, Thakur is like zombie, part of the dead and not the living. Ideologically, Thakur’s impairment not only points to an obvious collapse of law and order but is symptomatic of 1970s creeping disillusionment with institutional power. If Thakur symbolises masculine impairment and is positioned as a father figure to Veeru and Jai (effectively his sons) then this is a critical narrative juncture as the ‘real’ men look on at Thakur and witness the crumbling patriarch, which when linked to the notion of social order and ideological closure, must now be repaired in its entirety. This means the destruction of Gabbar. A similar narrative scenario arises in Deewaar with the patriarch, this time a maligned trade unionist, and more pronounced in terms of the politics of the time. Perhaps this is what links the films together although Sholay probably shares less with the angry young man cycle of films and more with classical Hindi cinema. A director’s cut of Sholay in which we see Thakur go through with his promise of exacting revenge by killing Gabbar completely changes the politics of the film and chimes much more with the impending Emergency of Indira Gandhi. It is also an ending that gives greater meaning to Jai’s death. 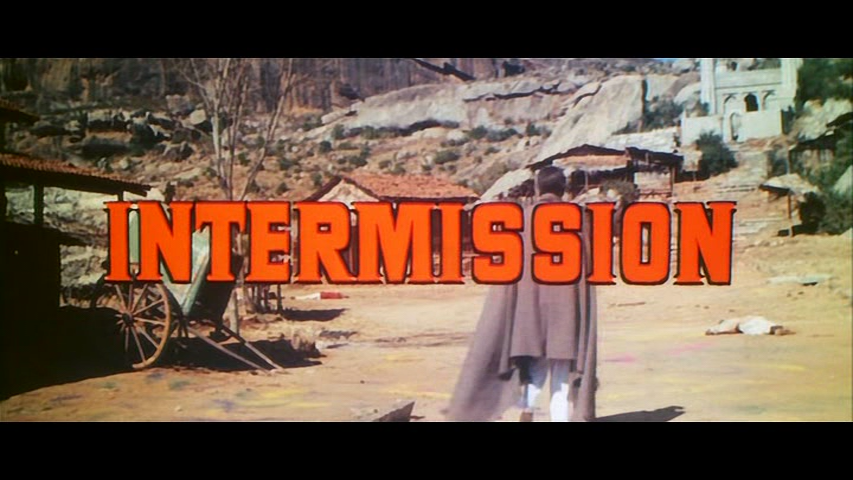 Sholay is being re-released this January but in 3D. I re-watched Sholay a week ago on the Corlotta French DVD which I downloaded from the Internet as it is apparently the closest to the way Sippy envisioned the film in terms of creating a widescreen experience. Although I am a little sceptical about a 3D release of the film, I am still waiting for a definitive DVD release of the film with extras. Why this has yet to happen seems like an absolute travesty given the film’s immortal and beloved status amongst Indian cinephiles, audiences and filmmakers around the world.