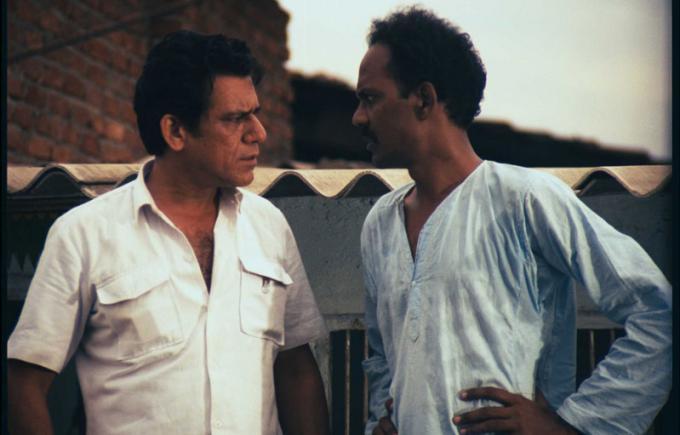 “Much of our cinema, even its so-called modern, alternative strand, is too referential. It thrives on imitation. It is not really our own cinema. We have to learn to break free and do our own thing,” he [Sudhir Mishra] argues.

Should an auteur be judged on the near impossible criteria of consistency or should one simply stand back and simply accept that most film makers can only really ever become accomplished, credible artists if they remain true to themselves. Consistency as a demarcation of a film maker’s authorial status is perhaps arbitrary when considering how virtually most directors unhesitatingly alternate between the personal and the banal. Sudhir Mishra continues to be plagued with what is an inconsistent body of work, wavering from ambitious mainstream failure to realist political cinema. His 1992 parallel art film ‘Dharavi’ set in the slums of Bombay and starring Om Puri and Shabana Azmi (social realist favourites) certainly suggests a consistent authorial approach yet his status as an influential film maker is undermined by an unevenness in terms of narrative structure that characterises a number of key films.

When exactly the parallel cinema movement started and ended is largely unclear because of the reality that an art cinema has tended to exist alongside the mainstream, popular outlets in the film industry of most countries. Shyam Benegal’s ‘Ankur’ (1974) and M. S. Sathyu’s ‘Garam Hawa’ (1973) certainly seem to act as definite starting points, signalling the birth of a new phase in the emergence of what would be dubbed ‘parallel cinema’. Though Sudhir Mishra has found it deeply problematic to make films on his own terms, ‘Dharavi’ was indicative of a movement which had peaked by the end of the eighties, occasionally producing a handful of noticeable art films in what was a largely commercialised nineties cinema. Perhaps this is why ‘Dharavi’ falls into the category of what is labelled as an unmemorable nineties art cinema.

Yet with the recent international success of stylised films like ‘Slumdog Millionaire’ and ‘City of God’, which have arguably popularised the imagery of slum poverty, Mishra’s realist morality appears wholly convincing and appropriately suited to depicting the lives of a marginalised underclass without resorting to the artifice of sentimentality or an overly constructed escapist narrative in which characters get the metaphorical chance to punch the air in glib satisfaction. A co production between NFDC and Doordarshan, ‘Dharavi’ revolves around a lowly taxi driver, played superbly by Om Puri, who dreams of starting his own business so that he can elevate himself out of the slums alongside his frustrated wife (Shabana Azmi), aging mother and naive son.

Combining a wonderfully atmospheric feel for authentic locations and an unpretentiously realist visual style, the film preys upon the prescient idea that mainstream entertainment in the form of popular cinema is both a diversion from confronting real man made problems in society and also a worryingly powerful distortion of inner ambitions. Mishra’s illustrative and inspired use of dream sequences which act as a projection of Om Puri’s opportunist fantasies features the presence of Madhuri Dixit as herself. The late Renu Saluja’s influential skills as an editor (a key figure in the parallel cinema movement) are evident in the tightly edited montage sequences depicting the visceral taxi journeys through the streets of Bombay, the original and appropriate use of slow motion and perhaps most significantly in the ideologically suggestive juxtaposition between reality and dreams.

Alternatively, Mishra’s film can also be viewed as a sociological study of male anxieties. Once all sense of moral dignity has become invisible to Yadav (Om Puri), a ferocious and uncontrollable anger stirs within the people of the slums who retaliate with violence, collectively resisting the sense of outrageous exploitation being committed in front of their very own eyes. The denouement may seem a little far fetched yet one suspends disbelief largely because the social oppression visible in the slums of Dharavi cannot remain repressed forever. However, nothing really changes for Raj Karan Yadav (Om Puri) as he reverts back to driving a taxi, confirming how survival and those like him are to an extent dependent on the democratic illusion of social mobility which is crudely propagated by the unattainable imagery of cultural icons like film stars. Mishra seems to be saying that the escape offered by Madhuri’s glowing red Saree may be infinite but at what price must this illusion be sustained?