Released in 1985 and directed by Shyam Benegal’s regular DOP, Aghaat (Anguish) takes a neo realist look at the politics of trade unions. Govind Nihalani’s film can be read as a delayed response to the persecution of trade unionists by the government of Indira Gandhi in the emergency of 75-78. Prior to Indira Gandhi’s unruly clampdown on civil unrest after declaring a state of emergency, industrial strikes had become rampant. Unions who campaigned on behalf of their workers for safer working conditions and better wages were met with bitter resistance from the ruling elite. In the film when one of the workers (Pankaj Kapur) is injured in an accident, the factory employers attempt to overlook their accountability by refusing to meet compensatory demands. Madhav Verma (Om Puri) is leader of the main union at the factory, arguing for stronger relations between the workers and the employers. However, an oppositional union, headed by Krishnan (Gopi) that is secretly encouraged by the factory employers comes to prominence, exploiting the fragility of the worker’s sympathies by offering unrealistic aspirations and ideals. 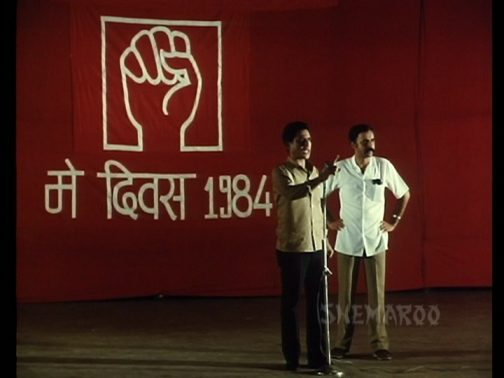 Madhav knows that it is only in the interests of the employers that two unions exist as it undermines the potency of political solidarity amongst the workers. Krishnan’s extremist tactics engenders a violence that engulfs the warring unions and subsequently wrecks Madhav’s non-violent attempt to negotiate a mutually beneficial settlement. Written by Marathi playwright, Vijay Tendulkar, who collaborated several times with both Nihalani and Benegal in the 70s and early 80s on a series of social realist works, contributing what was an ideologically engaged dimension to parallel cinema, reiterates a similar voice of dissent on the shameful exploitation and degrading treatment of workers. Nihalani was equally committed to the development of parallel cinema as that of Benegal and Aghaat’s obscurity as an exemplary illustration of oppositional film making is all but absent from contemporary Indian cinema. Regulars of parallel cinema including Naseeruddin Shah, Amrish Puri, Om Puri, Pankaj Kapur and Vanraj Bhatia as composer provide the usual superlative creative support.