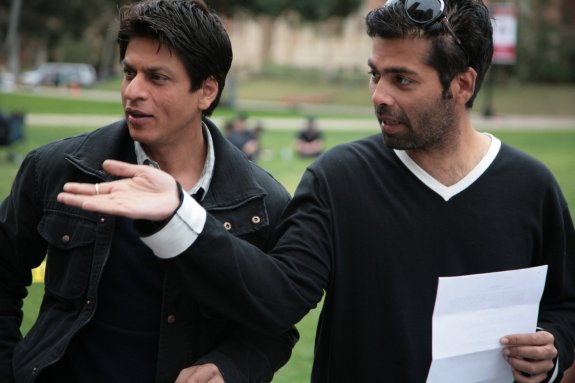 The all too familiar concept known as the suspension of disbelief is far greater in the mainstream Indian melodrama than it is in most Hollywood films and when it comes to a film by Karan Johar it moves beyond the hyperbole and into a realm of cathartic sentimentality. My Name is Khan has been one of the major Indian event films of the year, underlining the continuing global popularity of Indian cinema. Compared to his previous work, much of which has been highly derivative, director/producer Karan Johar’s latest film seems relatively restrained. Most critics prefer to trash the reputation and criticise the artistic credibility of populist directors like Karan Johar but to date he has directed four feature films which certainly qualifies for a closer look at his work. The defining characteristic of these four films has been Karan Johar’s close collaboration with Indian cinema’s biggest contemporary film star; Shah Rukh Khan. The star presence of SRK has meant all four films have enjoyed widespread commercial success particularly with the NRI audience to which Karan Johar has been accused of pandering at the expense of an indigenous, domestic one.

With Kuch Kuch Hota Hai (Something Happens) in 1998, Karan Johar successfully re-launched his father’s production company, Dharma Productions, which had enjoyed moderate success in the ninety eighties with films like Dostana (Friendship, 1980). The usual accusations of nepotism followed when Karan Johar’s entry into the film industry was on the film Dilwale Dulhania La Jayenge (The big hearted will take the bride, 1995) in which he appeared in a small role whilst supporting the director Aditya Chopra. This initial encounter with film making was instrumental in terms of establishing a team of key collaborators with whom Karan Johar would return to on many occasions. Most important was his introduction to both Kajol and SRK with whom we would go on to make three films. Equally significant was Karan Johar’s relationship with Yash Raj who initially acted as distributor of his debut film and with whom he has collaborated in the production and distribution of a number of successful films including most prominently Kal Ho Na Ho (Tomorrow May Not Come, 2003) directed by Nikhil Advani. Karan Johar and Aditya Chopra’s close working relationship has meant that Yash Raj more or less dominates when it comes to the populist mainstream Indian film as a global brand.

Perhaps it is not surprising that the rise of Karan Johar, Aditya Chopra and SRK run parallel with each other. Unfortunately, the critical reception for the majority of these films has been none too favourable. This continues to prevent a serious critical analysis from taking place of Karan Johar’s work. A lot of this hostility reflects a critical and cultural snobbery that exists amongst writers and academics towards the apparent ideological limitations espoused by populist cinema. Admittedly, some of the films Karan Johar has produced have been somewhat disastrous in terms of their glib ideological discourse and I can see why some would prefer to maintain a cautionary distance. However, this is exactly what makes My Name is Khan such an important evolutionary step in the career of Karan Johar as it operates in an explicit post 9-11 context. It is a contextual dimension which has been decidedly absent from the first three collaborations with SRK. In many ways, My Name Is Khan could be read as their first fully engaged ideological collaboration and also appears quite personal given SRK plays a Muslim character suffering from Asberger’s syndrome. Undoubtedly, the morality of the film is both a little simplistic and deeply sentimental but I am not entirely sure if we should let this emotionally manipulative approach detract from what is an unusually optimistic and perhaps even unconventional representation of a Muslim as the central character.

Prior to the film’s release, SRK’s comments on the IPL’s team selection in which Pakistani players were deliberately overlooked created a stir in the media, unleashing a torrent of sensationalist reporting in which SRK was criticised for his unpatriotic sentiments. It was enough to whip the right wing nationalist religious and political groups into a frenzy of misplaced protest. Writer and academic Vinay Lal’s comments are very illustrative here:

‘Shahrukh Khan, often described as the reigning star of Bollywood, is the most recent enemy of the nation identified by Bal Thackeray, the aging and agitated but still agile leader of the Shiv Sena. The sin with which Shahrukh is charged is none other than the suggestion, aired by some others as well, that the cricket teams which comprise the Indian Premier League (IPL) may have done an injustice to the Pakistani players by failing to make a bid for a single Pakistani player. Why the IPL teams did not make any such bid is an interesting question in itself, and what it says about the sentiments which predominate among the truly moneyed classes in India, is a matter that I shall have to leave aside for the moment. Shahrukh is alleged to have betrayed the nation by his remarks, but of course the matter is more complex. As a Muslim, he has always been suspect; and one of the canards to which the Sena subscribes is the view that the first loyalty of Indian Muslims is to Islam [the ummah] rather than to the Indian nation. Shahrukh and the other Khans of Bollywood, Salman and Aamir, and now Saif Ali, have long been resented for their domination of the Hindi film world.’

Turmoil in the Great City: Shahrukh and the Shiv Sena February 14, 2010 by Vinay Lal http://vinaylal.wordpress.com/

The Shiv Sena disrupted screenings of the film in India with attacks on cinema houses. Vinay Lal’s comments position SRK as an Indian Muslim who has never disguised or masked over his religious identity yet the family image of SRK in which the mandir and mosque co exist side by side constructs a truly secularist and progressive idea of Indian society that admittedly offers one of the best explanations for SRK’s worldwide appeal and iconic status as a popular Indian film star. The recent mainstream Indian event film has tended to be a film of two halves and My Name Is Khan follows a similar formula in which the first half is dominated by frivolity whilst the second descends into despair. Whilst the film remains faithful to Karan Johar’s sweet and sour dichotomy, it is the much wider post 9-11 context explored through the character of Rizwan that transforms this into the ideal vehicle for examining anxieties, fears and dilemmas confronting the Muslim community in America and the West. Much of the film’s sincere yet simplistic ideological drive hinges on the mantra, ‘My Name is Khan and I’m not a terrorist’, adopted and regularly articulated by the Forest Gump like Rizwan Khan. This unapologetic approach becomes a rallying cry when Rizwan sets out on a journey across America to meet the President so that he can defend his Muslim identity and counter the xenophobic attitudes which have taken hold of society after the aftermath of September 11.

Perhaps the biggest criticism of the film rests in its problematic and stereotypical representations of the African American community that Rizwan meets. Many of the sequences in Georgia made me feel slightly uncomfortable as I am certain Karan Johar and the writer could have easily stayed away from perpetuating regressive African American representations. Much of the film is constructed around Rizwan’s journey and the conventions of the road movie genre feature strongly in the narrative as he is brought into contact with a cross section of the Muslim community including the fanatical and extremist aspects. Hurricane Katrina and the flooding of New Orleans is also referred to explicitly and yet again I am not too sure this aspect of the film in which Rizwan leads a fight to help the abandoned people of a small town in Georgia convincingly fits into the narrative.

Nevertheless, both Chak De India and My Name is Khan have offered a different spin on SRK’s star image as both films have found him playing Muslim characters and both films have tried to explore the relationship between his on and off screen image. Chak De India was the first film to fully explore SRK’s Muslim identity in the context of a new Indian society, responding to the claims of Hindu Nationalist parties like the Shiv Sena ‘that the first loyalty of Indian Muslims is to Islam [the ummah] rather than to the Indian nation.’ (Vinay Lal, 2010) In this context, SRK has admittedly been quite open in the deconstruction of his star image and with My Name is Khan, we see him offer prayers and even appear in the confines of the Mosque, a space which has been defined by the media as somewhat fanatical and unsafe. In a way, My Name is Khan may not have appeared as a risky commercial venture given the fact it has become the biggest grossing Indian film worldwide but on closer scrutiny and especially with SRK playing a fully drawn Muslim character, audiences who preferred the romantic and secularist hero could easily have stayed away.

However, one could argue that this would never have happened given the expensive marketing campaign and the anticipation generated by such a prominent event film. As for Karan Johar, the family melodrama dominated his first three films but with My Name is Khan he seems to have finally shifted the focus to characterization and a concerted, if not simplistic, attempt at ideological engagement with contemporary political and social issues. Nine of the ten highest grossing Bollywood films in the UK feature SRK, underlining his dominance as India’s leading film star. In the UK, SRK’s films tend to outperform most of the major Bollywood releases and it is of little surprise that My Name is Khan has performed exceptionally well at the box office. The negative of such hegemonic star dominance is that alternative and independent Indian films rarely get a look in when it comes to distribution. The current worldwide gross stands at $36 million (box office mojo figures) which is very impressive but I am not sure if this could have been more considering the potential cross over nature of the film. In terms of its technical aspects, My Name Is Khan is just as good as most major Hollywood films and I think that the Hollywood studios are still waiting for the moment when a Bollywood film finally does cross over on a scale comparative to that of Slumdog Millionaire.