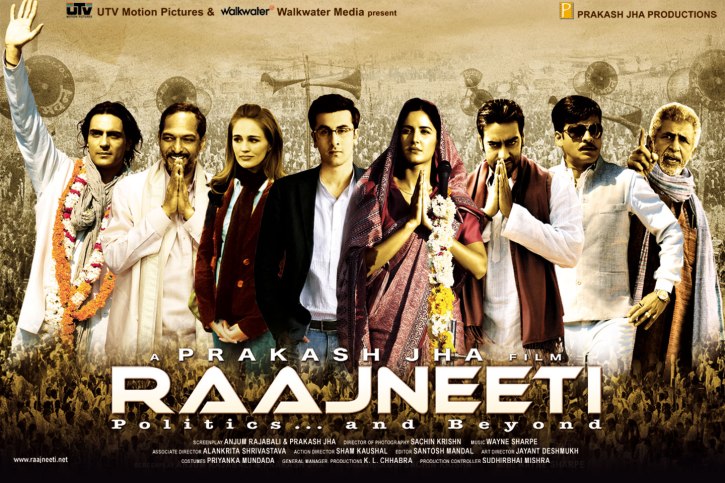 The Mahabharata revolves around the struggles between two princely families, the Pandavas and their cousins, the Kauravas for possession of a kingdom located near the present city of Delhi. The central character of the epic is Lord Krishna, a man of action and a statesman. The climax is the great battle in which Lord Krishna becomes the charioteer of Arjuna, one of the Pandava brothers.

Prakash Jha’s much touted and handsomely mounted political epic falls short of expectations. Though it is ultimately an uneven and somewhat disjointed film it still succeeds intermittently in borrowing liberally from India’s greatest narrative – The Mahabharata to writ large the destructive nature of politics in today’s society. A tentpole production from UTV motion pictures and featuring an impressive ensemble cast including the likes of Nana Patekar, Ajay Devgan and Manoj Bajpai, Raajneeti has been slickly marketed as an event picture. Supported by what is an equally expansive marketing campaign the film is likely to succeed at the box office. Of course, had Jha wanted to stick with the stalwarts of the Mumbai film industry the film would never have attracted the expensive budget it needed to do it justice thus the inclusion of a baby face Ranbir Kapoor and the model turned actress Katarina Kaif is perhaps the compromise that had to be made. I don’t think Ranbir Kapoor is a poor actor and with Rocket Singh he has shown a lot of promise but as the scheming and morally righteous son he is tragically miscast. I can understand that an up and coming actor like Ranbir Kapoor risks becoming typecast very quickly but showing range can also work against you especially when those around you in a film like Raajneeti have learned to work so naturally and fluently over so many years.

Manoj Bajpai is a terrific actor and after a number of years of obscure performances it is encouraging to see him being given a role worthy of his talents, much of which has been tragically wasted on seeing him but failing to fit into the mainstream. I guess it is largely the dependable performances of Nana Patekar and Ajay Devgan that rescues the film from being smothered by what is an overlong running time. Admittedly, Indian cinema is one of interruptions but the interval seemed to mark a turning point as the second half of the film falls short of sustaining interest in what amounts to a plethora of soap opera like constructed plot lines. However, having mentioned soap opera as though it was a dirty word would also be the right way of reading this film as The Mahabharata revolves around the most elemental and universal of conflicts, that of warring families. Yet one must also be weary of the fact that though Prakash Jha explicitly refers to The Mahabharata in his film this is a Hindu text that has permeated the very psyche of Indian culture and in many ways most TV shows, films and books knowingly or unknowingly acknowledge it’s influence. Of course we have been here before as both Shyam Benegal with Kalyug (The Dark Age, 1981) and Kumar Shahani with Tarang (Wave, 1984) as part of parallel cinema made their own versions of the Mahabharata in the 1980s.

With the character of Indu Pratap (Katarina Kaif), the references to contemporary Indian politics including Sonia Gandhi are quite obvious but one suspects if this element of the film was purely instigated to generate media interest in the project whilst also building wider contextual credibility. Jha does succeed in generating an epic sweep to his tale of power, greed and corruption and whilst we have witnessed the deconstruction of such universal themes before it was encouraging to see a film maker attempting to use political electioneering as a suitable and involving backdrop. I had the pleasure to see Raajneeti on a digital screen and it looked magnificent throughout especially the faultless cinematography. This film does have many flaws (including a ridiculous sub plot involving Ranbir Kapoor’s American girlfriend) but Prakash Jha is a graduate of the Pune Film institute and one can see clear signs of a film maker negotiating his own authorial demands with those of commercial cinema. Does he succeed though? On this occasion, I would have to say no.