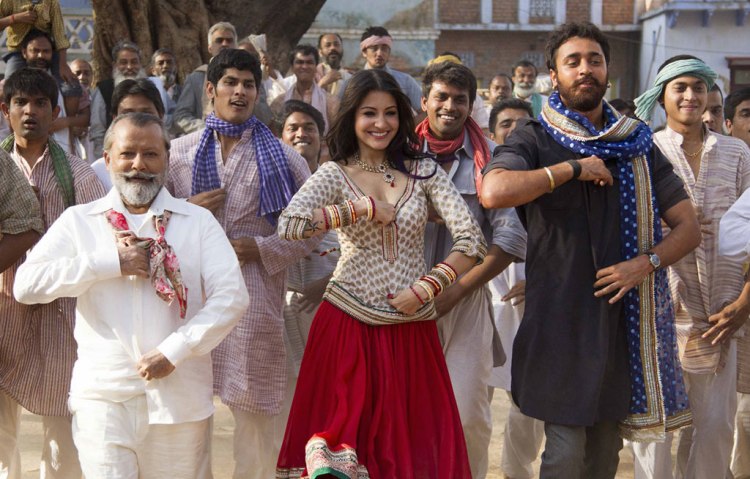 Matru Ki Bijlee Ka Mandola (MKBKM), labelled a ‘Bollywood political satire’, is a googly of a film traversing classical Hindi cinema (particularly agrarian pastoral films like Do Bigha Zamin) and the spirit of parallel cinema (a feudal revolt forms part of the narrative) with a postmodern satirical sensibility that squarely has neo-colonial capitalism as a target for critique and denunciation. Bhardwaj has in the past shown adeptness at integrating songs into his films so they become part of the thematic and narrative content but MKBKM is a film into two states of mind. It is both Bollywood and Indian art cinema, schizophrenically clawing at each other so it becomes a film about Bhardwaj the auteur trying desperately to explore very political themes in the guise of Bollywood cinema. Bhardwaj is arguably one of the more interesting filmmakers of his generation and MKBKM’s average commercial business clearly suggests the quirky and edgy marketing for the film was too smart for audiences. In many ways if one was to discount the songs and the love story then MKBKM could be classed as a film that harks back to parallel cinema. Some of the visible intertexts include the casting of Pankaj Kapoor and Shabana Azmi, iconographic markers of parallel cinema. Perhaps the most striking link is to Jaane Bhi Do Yaaro, an influential political satire and key film of parallel cinema which also features Pankaj Kapoor in the role of an exploitative housing contractor. In MKBKM Kapoor plays the role of an ambivalent zamindar seemingly in cahoots with the state minister to sell of land owned by peasants to make way for a shopping and apartment complex. In the past, the zamindar has been constructed monolithically as stereotypically despotic, remorseless and morally corrupt. Nonetheless, MKBKM might be a first for the zamindar as we see a buffoonish redemption that takes hold at the end, forging an alliance with the oppressed peasant farmers. This could be interpreted as ideological fantasy though which is as brilliantly audacious as the Gulabi Bhains (pink buffalo) that haunts the drunken imaginings of the zamindar. MKBKM shares much in common with Peepli Live but cleverly filters ideology through the prism of populist Hindi filmic tropes.