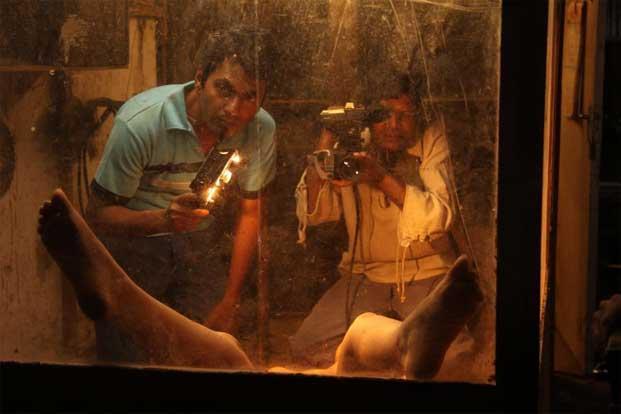 Defying categorisation certainly testifies to the originality of director Ashim Ahluwalia’s latest feature Miss Lovely. Most of the reviews to the film particularly the ones from America and Europe find it difficult to position the film within the context of Indian cinema (past or present) and inevitably fall into the trap of unfairly comparing the film to Boogie Nights. This smacks of a eurocentric attitude when it comes to reviewing Indian films especially from Bollywood. Slant reviewer Glenn Heath Jr. argues ‘the women of Miss Lovely certainly deserve better’ but this is a point that goes unfounded (the review is challenged by a comment left by an eloquently enraged fan of the film) if one compares the female representations to mainstream Hindi cinema and even Indian independent films. This point levied at gender politics seems particularly unfair if one goes about comparing the representation of women in Indian films to those in Hollywood since differing cultural, institutional and political contexts are in operation. Besides, by using Boogie Nights as a point of excellence when discussing cinematic representations of the porn industry is flawed in that Anderson’s female characters are not entirely absolved of the male gaze. Respectively, the misreading of a film can usually be detected in the way a reviewer relinquishes original interpretation for an unhealthy postmodern dependency on filmic intertexts as this not only gives the reviewer more to write about but also situates the film within populist signifiers that we can all identify with.

Miss Lovely has to be situated in the context of an ongoing and significant new wave of Indian ‘indie’ films that continue to challenge in radically iconoclastic forms the politics of gender, class and power. If Miss Lovely had been made ten years ago one could have easily dismissed the film as a singular anomaly. However, to say this kind of daring cinema would never have got funding ten years ago rings false as one of the main supporters of Miss Lovely is NFDC, a key player in parallel cinema, which has continually financed edgy, esoteric cinema. On the surface Ahluwalia’s film is about two brothers working in the illegal world of C grade porn/horror cinema. However, Ahluwalia uses this narrative trope of brothers in conflict (the mother figure is absent who typically acts as mediator) as a means of filtering the melodrama through a self reflexive study of his own gaze as a director and the film industry as a whole. Last year, Kaushik Ganguly’s Shabdo, delved into the life of a foley artist with an atmospheric brilliance, offering a telling insight into the often overlooked department of sound and its contribution to cinema. Similarly, Miss Lovely succeeds in building an evocative atmosphere of sleaze and desperation through a quasi documentary aesthetic sensibility. At the same time, Ahluwalia remaps the Mumbai filmic terrain, filming in new spaces in the way Parinda and Satya did so to not only reconfigure the cinematic geography of Mumbai but also construct the city as an urban prison, thereby invoking noir like allusions.

Sonu’s (Nawazuddin Siddiqui) dream of raising money to make a ‘real’ film titled eponymously ‘Miss Lovely’ could just easily be construed as an allegory for the filmmaking business itself. Both Sonu and his older brother Vicky (Anil George) find themselves at the mercy of vindictive financiers who are seen to use the industry as basis for exploiting the girls entering the business. Whereas the first half sees Ahluwalia interested in the sordid machinations of the industry, the second half, is more ideologically pronounced detailing the Indian government’s inability to reconcile with the C grade sex industry. Here questions concerning censorship, exploitation and violence are raised directly in a pre-internet age of the 1980s. Having seen Nazia Hassan credited at the start I was anticipating how exactly Ahluwalia would use her music and which song. Unsurprisingly, he savours this musical opportunity for the final moments of the film, which are also the most audacious and cinematic. The end shot sees Sonu, covered in blood from having killed his brother for betraying him, enter a studio filming a sequence with Pinky, a new star. Pinky is an actress who has eluded Sonu throughout the film, refusing to have anything to do with his line of business. Nonetheless, this final moment reverses everything. Not only is Pinky now a sex star of the C grade film world but the confidence with which she performs for the camera to the music of Nazia Hassan’s ‘Dum Dum Dee Dee’ makes for the ultimate spectacle of desperation. What has driven Sonu to this point in the film stems from his brother’s betrayal whom he discovers coerced Pinky into the sex industry, the girl of his dreams and film. As Sonu looks on he realises that although Pinky is now part of a world from which she can never return, her performance for the camera is characterised by an honesty, the desire for fame. In this fleeting moment, a strained half smile appears on Sonu’s face as a sign of acknowledgment of a shared desperation at the need to be someone else in a world of hypocrisy.

What makes Miss Lovely such a remarkable work in the context of contemporary Indian cinema is that it lifts the lid on a hidden world, breaking many taboos. Most importantly, it presents a counter hegemonic view of the Indian film industry, shining a light on the impossible dreams and desires of the good, the bad and the ugly who populate such a bygone world.