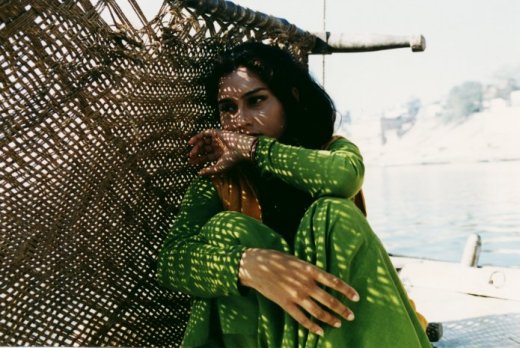 Jaya Ganga is a tale articulated as if it was part of a wider mythical narrative while having roots in something metaphysically profound. The film draws on the mysticism of the Ganges, conjuring two female characters, extending from the same soul. In both instances, the two female apparitions could just as easily be fictitious imaginings of the writer Nishant who journeys down the Ganges in search of a confounding truth. This film’s strength resides very much in its tragic narrative trajectory, a wounding one, finding a sacred beauty in the most fatalistic of endings. Zehra, a gentle courtesan, appears as discordantly as the memory of Jaya and Nishant falls in love with her. Helping her to escape from the brothel in which she has been incarcerated recalls the conventions of courtesan films such as Pakeezah and Umrao Jaan. Unlike Nishant, a professional writer, Zehra has no place in society and thus in a way her outsider status simply adds to her mystique.

Like Scottie in Vertigo who becomes fixated with the impossible and misogynist notion of the ideal woman, Nishant supplements what he cannot attain with Zehra leading to a tragic outcome. By trying to rescue Zehra Nishant is also playing out romantic imaginings as a means of testing his masculinity which craves for excess. Jaya and Zehra are not mirror images though; they represent different male fantasies and desires. Jaya fulfills an intellectualism which Nishant associates with modernity whereas Zehra is an image of sensuality recalling an ancient tradition. For both ideas of womanhood to exist side by side, tradition and modernity, is in fact impossible since it is not right for a man to lay claim to such infinite desire as it harbours a mutual destruction of both. Jaya Ganga is a haunting melody of a film based on Vijay Singh’s novel of the same name which he adapted as his directorial debut.

Jaya Ganga has been released on DVD by NFDC’s Cinemas of India Label. However, the film is not a new transfer and is formatted incorrectly.