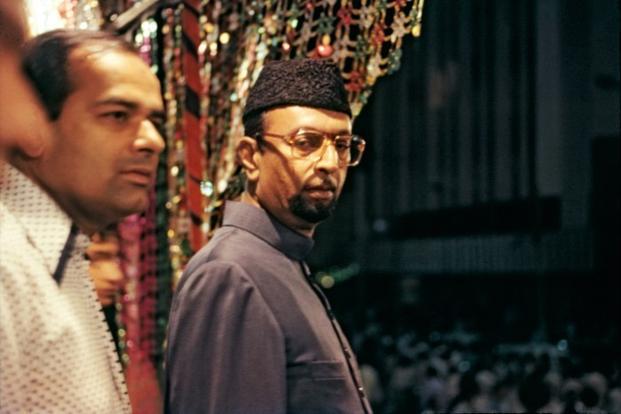 In the accompanying notes found in the booklet to Arsenal’s (Institute for Film and Video Art) DVD release of Deepa Dhanraj’s 1986 Kya Hua Is Shahar Ko? it says that this work is more than just a documentary but

‘might very well be the only audio-visual record of communal violence and its political context in the mid 1980s’.

Not only does this underline the intervening activism of Hyderabad Ekta in trying to account for the surge of communal violence in the city of Hyderabad in the 1980s but it emphasised the lack of accountability for the crimes perpetrated by Muslim and Hindu religious and political parties in their contest for power. What makes this work altogether more unique is that it is perhaps

‘the only independent, non-state funded documentary film engaging with the specific events it follows and analyses’.

Although Deepa Dhanraj is credited as director, the film opens with Dhanraj sharing directorial credits with cinematographer Navroze Contractor and Keshav Rao Jadhav (script & commentary), reiterating the altruistic nature of the group and the risks that they took in order to catalogue as much of the riots and their aftermath. The extras which includes video interviews with the crew is tremendously important in helping to contextualise the work, offering a historical overview and presenting Dhanraj’s insightful critical reappraisal of the documentary, arguing her militant ending would be framed more progressively today. The legacy of this work is that it not only critiques the way religious demagoguery manipulates the sentiments of the working class in the old city of Hyderabad but perpetuates an imaginary division between Hindus and Muslims that has led to the dangerous consolidation of Hindutva as a political entity. Interviews with the victims of communal violence through an observational approach in fact exposes yet again the horrors of poverty affecting all people.

Filmmaker, feminist (she is certainly one of the few filmmakers to have given a voice to the working class women of India especially lower caste and peasant women who are rendered invisible by the media at large) and activist Deepa Dhanraj has made many documentaries over the years but this is the first work I have come across. She seems to have been blotted out of the discourse on Indian cinema. Unsurprisingly we have yet to have had a major study or academic publication on documentaries from Indian cinema especially the progressive activist work. I think much of Dhanraj’s work is not available on DVD but a search on the Internet threw up some interesting finds which I have listed below. Her IMDB page only lists three documentaries which is at odds with other articles written about her work. Either way, her work definitely needs to be made available more widely since like Anand Patwardhan counter hegemonic studies of communalism, demagoguery and the secret crimes committed by the Indian government against the marginalised are ever so relevant given Modi’s terrifyingly benign crypto-fascist ideologies. Thankfully, Kya Hua Is Shahar Ko? has been salvaged from the past and deserves its place amongst some of Indian cinema’s most urgent political works. The documentary was also screened at the Bradford International Film Festival in 2013 as part of their celebration of 100 years of Indian Cinema.

1. Something Like a War (1991) – focuses on the coerced sterilization of women in India

In The Forgotten Generation older people aged over 60 in urban Tamil Nadu, rural Rajasthan and tribal Maharashtra reveal the realities of their lives, relationships and work as well as their expectations of the future. We learn how they manoeuvre within tight constraints to create new social and economic opportunities for themselves, their families and friends and how targeted social pensions are producing Kafka-esque encounters with the State. (synopsis by penny Vera-Sanso)

3. The Advocate – based on the life of KG Kannabiran, India’s foremost champion of civil liberties and human rights

Unseating the assumption of old age dependency, We’re Still Working, reveals the extent to which families, communities and India itself rely on older people’s work. Shot in urban Tamil Nadu, rural Rajasthan and tribal Maharashtra the film makers argue that people aged over 60 are shouldering the burden of India’s economic development by providing low-cost labour that makes India competitive in the global market. Yet, older people’s work and their moral and legal rights as workers, citizens and people remain unacknowledged. (synopsis by penny Vera-Sanso)