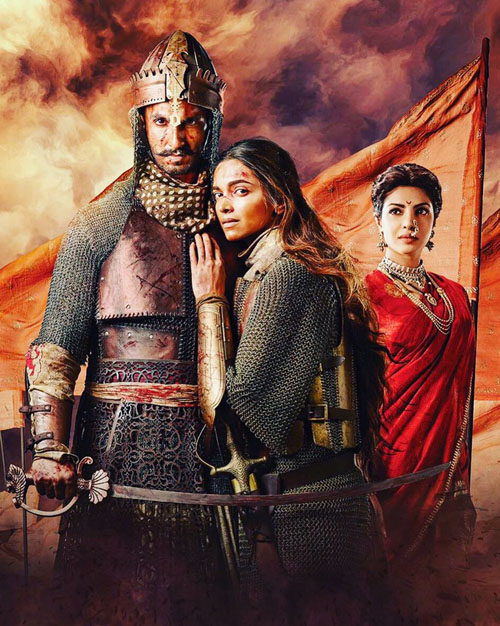 Director Sanjay Leela Bhansali’s films have tended to confound me for their emotional and psychological emptiness, often masked by a fondness for the engrossing worlds he imagines through the art of production design. Bhansali is an unashamed mainstream, populist filmmaker who with his interests in narratives of unrequited love and fatalistic romance recalls the films of the golden age of Bombay cinema. His films are also marked by their notable musical compositions and elaborate choreography, recalling the way Guru Dutt often found innovative ways of picturising songs to extenuate narrative and thematic ideas. Nonetheless, his films have never quite come together as a whole; one appreciates elements in them but never the complete work. Bhansali’s cinema exists in a world of self indulgence and hyperbole, and this has often meant his film’s tend to self implode as the narrative digresses into beautifully staged, isolated moments of mise-en-scene spectacle.

With Bajirao Mastani, a long gestating project and labour of love, Bhansali has finally created something organically whole. The story itself is not that complicated (the familiar Bollywood love triangle), drawing on past cinematic imaginings of Maratha and Mughal histories, but it is the Hindu-Muslim love affair as social, cultural taboo that gives the film an unexpected, prescient contemporary twist. While Bhansali is never really interested in pursuing the deeper politics of the Hindu-Muslim dimension, the film does raise several questions about the nation-state, notably secularism, acceptance, belonging, national identity and assimilation, which admittedly form part of a much larger conversation concerning free speech and the tolerance/intolerance debate. Bhansali has worked with newcomers in the past but he prefers to cast major film stars in many of his projects, as this seems to be the guarantee of a considerably substantial budget.

Certainly there are problems with Bajirao Mastani, notably the simplification of the Hindu-Muslim paradigm, which is reduced to a mythical sensibility. As a piece of cinematic spectacle, this is perhaps the sharpest Bhansali has been to date, conjuring a sense of the epic with not so much his battle sequences but a outlandishly ‘tangible’ production design by Saloni Dhatrak, Sriram Iyengar and Sujeet Sawant, fusing thematic motifs of fire, water and blood into an ardently byzantine expressive scheme. Most salient though is Bhansali’s staging which is a lot more measured than his previous efforts, allowing sequences to breathe, opting for the studious master shot in many occasions to not only foreground the scale of the world we are in but to create even at times a seemingly contemplative cinema.

Since Bhansali is working with three major stars, Ranvir Singh, Deepika Padukone and Priyanka Chopra, he has to a certain degree give them equal screen time, and there is certainly enough in the script to showcase their stardom. It is Deepika’s Mastani that intrigues the most, the Muslim outsider, who longs for acceptance, recalling the conventions of the Courtesan film in Indian cinema. Mastani’s partial acceptance, signposted in a celebratory dance with Kashibai, Bajirao’s first wife, yet again underlines the necessity of songs as a central emotional device. But Mastani as Bajirao’s illegitimate wife, labelled his Muslim mistress, is never fully accepted into a Hindu nationalist Maratha empire, and nor is Bajirao for his secularist stance, articulates the politics of religious, social, cultural tolerance that is so much at stake in the new India. In many ways, like PK and Bajrangi Bhaijaan, Bajirao Mastani is another mainstream Hindi film, viewed as a reaction to the current BJP Modi govt., contests the legitimacy of Hindu nationalism as the hegemonic prism through which we should read the histories of India.