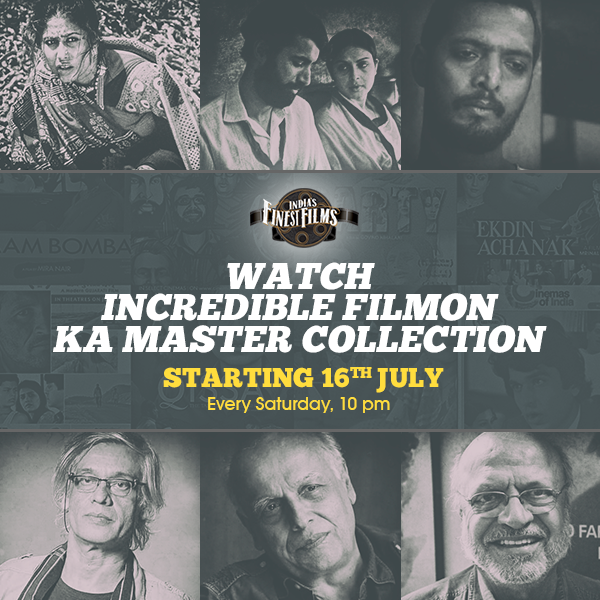 Over the coming months Zee Classic will be celebrating the ‘Other’ side of Indian cinema, screening an extended run of Parallel Cinema films, titled ‘India’s Finest Films’ (16th July – 15 Oct). With the recent restoration of The National Film Development Corporation (NFDC) back catalogue, Parallel Cinema is ripe for rediscovery by a new generation of film audiences. And with the emergence of the Hindie (Hindi + Independent) that has witnessed a new wave of young directors in Bombay, Malayalam and Tamil, the topicality of Parallel Cinema seems particularly timely for a retrospective.

The NFDC was first established in 1975, taking over the Film Finance Corporation (FFC) as a state sponsored funding body, helping to develop quality cinema in India. Parallel Cinema is a non-commercial type of cinema characterised by a repeated emphasis on realism, socio-political themes (feudalism, gender, caste), the use of non-stars, location shooting, experimental narratives, and the significance of the director as the main creative, authorial force. While it could be argued Parallel Cinema does not have a distinctly uniformed aesthetic, thematic style, many of the films, which will be screening in this season often, show marginal, invisible people, issues and places of India in conflict with the ruling establishment.

The season kicks off on Sat 16th July with the award winning Salaam Bombay! (1988), Mira Nair’s startling neorealist debut about the spirited street children of Bombay, a major influence on Danny Boyle’s Slumdog Millionaire (2008). Shafiq Syed who plays the main lead Krishna delivers one of the great child performances in a city of displaced migrants, broken dreams and lost innocence. Salaam Bombay! is followed by Ketan Mehta’s masterful colonial allegory, Mirch Masala/Spices (1985). Ketan Mehta is one of the few active Parallel Cinema filmmakers, producing his most politically corrosive work in the 1980s. Mirch Masala (showing on 23rd July) is a tale of feminist resistance, defined by a superlative performance by the iconic Smita Patil, certainly the best actor of her generation.

It is welcoming to see the work of underrated director Saeed Mirza, in the shape of two rarely screened films; Salim Langde Pe Mat Ro/Don’t Cry for Salim the Lame (1989) and Arvind Desai Ki Ajeeb Dastaan/The Strange Fate of Arvind Desai (1978). The first film is perhaps Mirza’s most personal. Set within the impoverished and marginalised working class Muslim community of Bombay in the 1980s, Salim (Pawan Malhotra) is an unemployed urban rogue who gets caught up in the toxic bind of communal politics and gang culture. Salim Langde Pe Mat Ro (showing 30th July) is one of the few films to have come out of Indian cinema that depicts the Muslim community with a startling complexity. Shyam Benegal’s Mammo (1994), also screening as part of the Zee Classic season on 27th Aug, is a complementary study of the Indian Muslim community, a relatively under-seen Benegal work, that appeared in a post-Ayodhya context and dealt sensitively with the theme of partition recalling M. S. Sathyu’s exceptional Garm Hava/Scorched Winds (1974). Whereas Salim Langde Pe Mat Ro is a fiercely political work, Arvind Desai Ki Ajeeb Dastaan (showing on 8th Oct), Mirza’s debut film, a satirical work, was the second project of the short-lived Yukt Film Cooperative (made up of Parallel Cinema filmmakers including Mani Kaul) and is set in a middle class milieu of Marxist misfits and centres on the story of an angry young man trying to find his voice in a corrupt, portentous late 1970s Bombay culture.

The NFDC funded many films by new and also established directors. Bengali director Tapan Sinha’s Ek Doctor Ki Maut/One Doctor’s Death (1990), showing on 6th Aug, a realist melodrama, is one of Sinha’s lesser-known works. The film charts the trials and tribulations of one doctor’s attempts to seek recognition from the state for the vaccine he has developed to fight leprosy. It is a sobering tale with terrific performances from Shabana Azmi and Pankaj Kapoor. The film features an early role for Irfan Khan as an aspiring journalist. Shabana Azmi, another key element of Parallel Cinema, also stars in the delicately observed comic gem Pestonjee (1987), alongside Naseeruddin Shah and Anupam Kher. What makes Pestonjee (showing on 3rd Sept) inimitable is theatre director Vijaya Mehta’s nuanced study of the Parsi community of India.

And the contribution of playwrights to the stories of Parallel Cinema was significant. Expressly the involvement of Vijay Tendulkar who wrote the script to one of Parallel Cinema’s most celebrated films, the brazen police thriller Ardh Satya/The Half-Truth (1983), directed by the talented Govind Nihalani, Shyam Benegal’s regular DOP. The influence of Ardh Satya (showing 20th Aug) is detectable in much of contemporary Mumbai noir cinema and Om Puri’s ferocious performance as police inspector Velankar is career defining. But what makes Ardh Satya particularly prescient is the ways in which the system paralyses Velankar, creating a feeling of insurmountable dread. Another often forgotten film in the canon of Parallel Cinema is Pradip Krishen’s 1985 Massey Sahib/Master Massey (showing 17th Sept), a finely written character study of identity, belonging and power in 1920s colonial India.

The Zee Classic season of Parallel Cinema will also see the premiere of the 1982 epic Gandhi (showing 13th Aug) directed by Richard Attenborough and featuring second unit work by Govind Nihalani and Kamal Swaroop. While it is problematic to situate Gandhi as part of Parallel Cinema, the film revived the fortunes of the NFDC, subsequently expanding their production output and leading to a commercial growth, augmented by the partnership with Doordarshan. The season will also showcase the contemporary output of the NFDC. This includes three recent award winning NFDC films, Qissa/Fable (2013) – showing 10th Sept, The Good Road (2013) – 15th Oct, and Gangobaai (2013) – 1st Oct, which all owe a debt to the legacy of Parallel Cinema. Qissa in particular is a haunting fable about partition, memories and family that stars Irfan Khan, one of Indian cinema’s most versatile actors in one his best roles.

For me personally the film that really stands out in this retrospective is 27 Down (1973) – showing on 24th Sept, an idiosyncratic melodrama, directed by the promising Avtar Krishna Kaul, who died tragically after the making of the film. 27 Down fetishises the imagery of the train, one that is notably ubiquitous to the visual iconography of Indian cinema, while narrating a gentle love story. 27 Down is a remarkably innovative work.

Parallel Cinema faded away in the mid 1990s, superseded by the globalization of Bollywood cinema and the burgeoning Non-Resident Indian (NRI) film. While the NFDC continues to ardently support independent, alternative cinema in India, after nearly three decades, Parallel Cinema remains an exceptional moment in the history of Indian cinema. It is a legacy worth preserving and one that needs to be celebrated more often. And to those of you unfamiliar with the riches of Parallel Cinema the season on Zee Classic is a great introduction to an alternate cinematic universe.