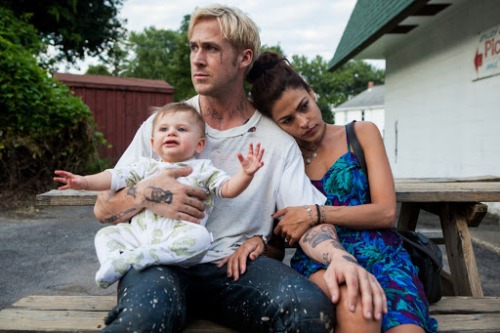 I’m still convinced that as Ryan Gosling gets older he’s going to eventually look like Jimmy Stewart; it’s that curvature of his elongated face and dewy eyes. Much has been made of Gosling’s performance in this latest feature from director Derek Cianfrance and it is suggestive to the film. Gosling is a performer who is superb at conveying emotions through effective uses of silence. In fact, Gosling would be perfect in both a western by Sergio Leone as a gunslinger and a shadowy gangster in any Melville’s polar films. In other words, the less dialogue for Gosling, the better. This was proven by a near wordless performance as The Driver in Refn’s 2011 Drive. Gosling takes a similar approach in The Place Beyond The Pines, playing a disaffected and incorporeal young man who finds it insufferable to make a concrete connection between his responsibilities as a father and the demands of adulthood. Gosling plays Luke, a motorcycle stunt driver, who gets his thrills from entertaining crowds of enthusiasts at a travelling funfair. Luke is a drifter with no attachments other than his bike, which he considers to be family. He indulges his solitary existence in the transient, nomadic nature of the travelling funfair. The absence of any kind of family around him points to a potentially tough childhood, which is explored allegorically in the final third. The Place Beyond The Pines is essentially an old fashioned melodrama, framed against familiar social thematics including absent fathers, corruption, power and history. Luke’s story turns out to be the first in a triptych narrative that transforms from an opening tale of desperation into one about class and exploitation. The narrative shift from Luke to Avery Cross, a police officer, played by Bradley Cooper strays into Sidney Lumet territory of corrupt cops but Ciafrance weaves into this overly familiar genre convention, the idea of class. When Cross shoots Luke as a result of a bank robbery that goes awry, the elevation of Cross into a local hero sees him become embroiled with some of the corrupt cops in his precinct. However, it is only later does it become more evident that Cross has a powerful father as a judge and he uses his privileged status to turn in his friends in order to further what turns out to be an ambitious, if not cynically opportunistic, political career. This is one of the more ideologically complicated statements as we witness a perpetual cycle of class struggle and more specifically exploitation in which power and status silence those like Luke who live and die on the margins of a vacant American society.

The final part of the film is arguably when the film falters. Although the central theme of fathers and sons comes to vivid fruition, the casting of the two teenage boys and their characterisation is uninspired to say the least, reminding me of an inept pilot for a new series about disaffected youth in the 1990s. While the presence of Luke is rendered symbolically in the last two parts, it is the character of Romina (Eva Mendes) who provides a narrative bridge in the triptych. Romina, who works as a waitress in a diner, is a social outsider and her ethnicity (likely Mexican) underlines separateness yet she is by far the most dignified of the broken characters we encounter. It is a dignity threatened by the insecurities of the men around her. Given the genre context of the melodrama, if Romina comes to embody an ideal about family then both Luke and Avery are deconstructed as fathers and men who cannot function within the realm of family as the past prevents them from doing so. What this means is that a crisis of masculinity emerges discordantly from the three parts and culminates in a moment at the end, which seeks to articulate a view of fathers and sons predicated on class. What I find disconcerting is when films longer than two hours are automatically labeled with the tag of ‘epic’ when in fact ‘epic’ means something entirely different in film. The epic was and still is considered a useful genre category but now the term has become associated with porridge like cinema of The Avengers kind. What I admire about Ciafrance’s approach is that he takes his time with the storytelling but the way some characters are introduced and not even explored seems to be one of the recent detrimental effects of contemporary TV Drama upon film narrative. What gives this American independent film a certain edge is the masterfully atmospheric score by Mike Patton, which imbues much of the drama with a tone of dread, and uncertainty that recalls the work of Badalamenti for Lynch. Altogether, The Place Beyond The Pines makes for a superior American melodrama.