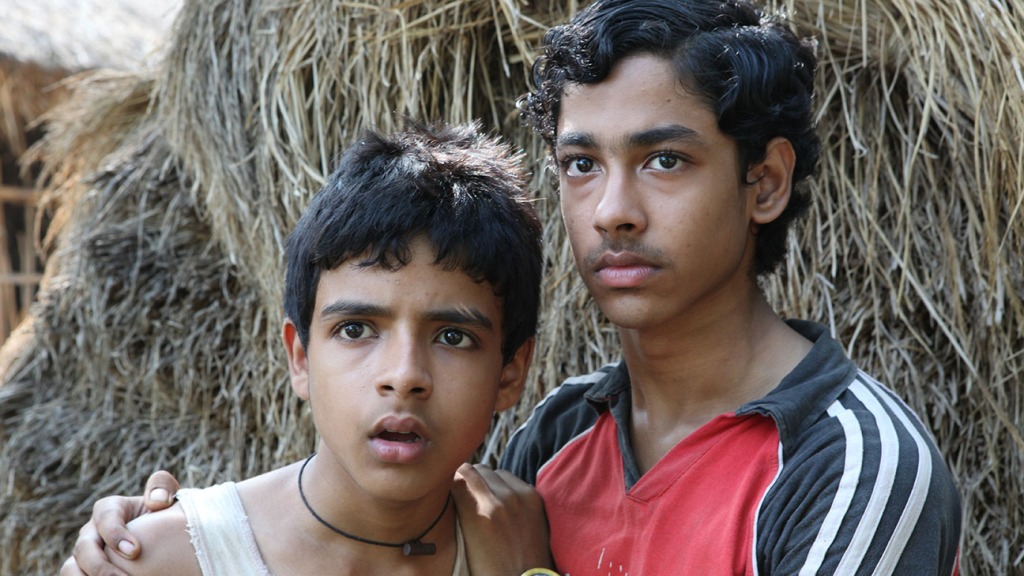 Synopsis: A fourteen year old dalit boy is growing up in an unnamed corner of India. His dream is to go to a town school like his elder brother and his reality is to look after the pig that his family owns. His only escape is to sit atop a Jamun tree and adore his beloved passing by on her scooter. His unspoken love is as true as his mother’s helplessness who cleans the cowsheds of the local strongman’s mansion, with whom she also has a secret liaison. When the boy’s elder brother comes on a vacation to the village, he soon finds out about his younger brother’s infatuation. The learned elder brother makes him realize the need to express his love and helps him write a love letter.

I’ve been considering what to say about this film for a few weeks now but still cannot find the clearest way to express my thoughts. The film deals with feudal caste politics in an Indian village. What it is clearly trying to do is recall the films of parallel cinema which were interested in Subaltern ideology and representation. Chauranga is closest to the cinema of Shyam Benegal and particularly recalls Ankur. Similarly, the maid servant who is enslaved to the local Brahim family is readily exploited for sex while her two sons are mistreated by the upper caste Brahim boys who roam the village with pernicious impunity. Writer-Director Bikas Mishra does what Benegal did regularly in many of his early films that can be positioned within the sphere of subalternity, he humanises the powerful and the powerless but in a subtle twist on a familiar tale of rural caste oppression Mishra brings in a touch of providence that complicates the tragedy that befalls late in the film.

Rest assured Mishra aligns himself with the Dalits and is especially interested in the narrative perspective of the two boys and their differing personalities; one wants to study abroad while the other is an outright rebel who refuses to be subjugated like his mother. Mishra’s benign depiction of the Brahmin family in which an ancient brand of violent patriarchy breeds is especially disturbing since an unspoken nexus of oppression exists amongst the men that is never questioned; it is natural and normal for them. Since Dhaniya’s (Tannishtha Chatterjee dependable as ever) death is framed ambiguously makes it difficult for us an audience to pass a judgement on Dhaval (Sanjay Suri), the Brahim patriarch but when Dhaval, by chance, intercepts the love letter which older brother (Riddhi Sen) writes in jest for his younger brother Santu (Soham Maitra) who is in love with a Brahmin girl, it offers Dhaval the opportunity to annhilate his crimes by expunging the Dalit family from the village. Incensed by Santu’s innocent propositions to his daughter, Dhaval sanctions the violence enacted against Dhaniya’s children. What comes to the surface are caste tensions, exploding into brutality, recalling yet again the cinema of Benegal and his rural trilogy including Ankur, Nishant and Manthan. Another link to parallel cinema is the presence of Bengali actor Dhritiman Chatterjee (Padatik, Pratidwandi, Akaler Sandhane) who plays a blind priest.

Something that Benegal refused to do in many of his films in which he brought to light subaltern exploitation was to never present Dalits as completely subjugated. Instead he often showed the subaltern as a political force resisting, fighting back and challenging the status quo. Perhaps this was a little idealistic and never truly depicted the cruel reality of caste politics, that they could not fight back, that they simply had to get on with things. Mishra advocates such a truism and it is a painful one but one that seems altogether appropriate for the poignant note on which he ends. Santu escapes, unlike his older brother, but as he looks back at the village on the train we get the sense he has never been any lonelier. It’s a parallel cinema ending, a homage of sorts that works as social protest while articulating an underplayed belief that Santu’s escape is almost necessary, that the best thing for him is to remove himself completely from the village as this will at least let him live without the fear of being persecuted. Nonetheless, Santu’s future’s is equally uncertain now and one thing is for sure, no matter where he goes he will always be invisible. This is a terrible truth that Mishra does brilliantly to expose.