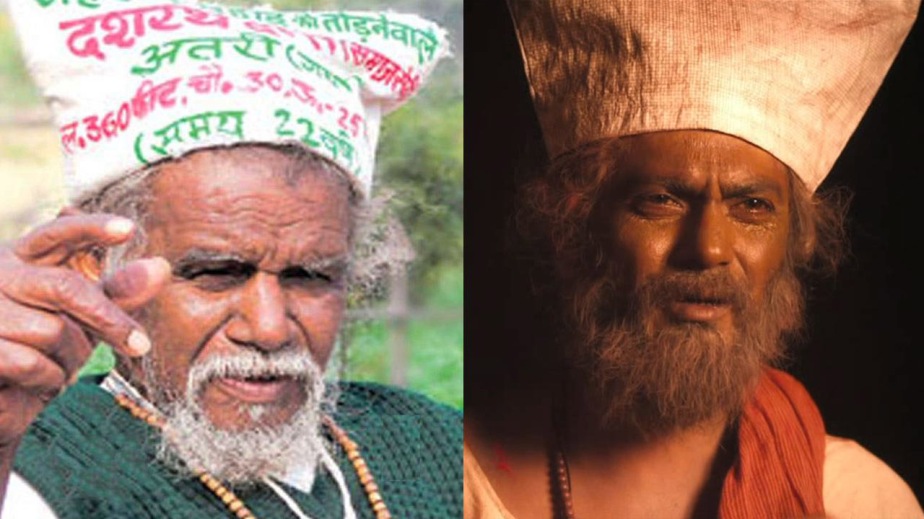 Ketan Mehta is questionably one of the few remaining Parallel Cinema filmmakers still actively making films. One could probably include Shyam Benegal in this tryst. Many of the Parallel Cinema films declared an affinity for ‘Subaltern Voices’ (see Sangeeta Datta’s monograph on Shyam Benegal), which in turn became a recurring unofficial hallmark of institutional NFDC policy, and Mehta’s latest film ‘Manjhi – The Mountain Man’ spiritedly recalls the Parallel Cinema movement. Manjhi is a co-production between Viacom and NFDC, a collaboration between private and public funding, resulting in a film that is an uneven mix of politics, melodrama and history. One of the most confusing aspects of the film is the way Mehta structures the narrative, shifting back and forth without any real purpose other than to overstate the decorative idea of one man’s journey. Parallel Cinema intervened in the historical invisibilities of India, functioning as an instrument to decentre monolithic narratives that often marginalised subaltern groups especially the lower castes. Mehta was a central filmmaker in this project and his early work in this period is remarkable, if not, inconsistent.

The inherent contradiction of subaltern re-presentation was the complicated question of who was doing the representing; namely a privileged middle class body of filmmakers. While it would be wrong to dismiss the credibility of caste politics in Parallel Cinema, the issue of caste has a clearly variable record in contemporary popular Indian cinema. Mehta’s film is fundamentally about caste and one can certainly see evidence here of NFDC’s institutional involvement but unlike ‘the developmental aesthetic’ (Prasad, 1998) that emerged from Parallel Cinema in an attempt to break with the legacy of realism in Indian cinema, Manjhi operates in a universe of compromise, projecting a somewhat timid discussion of politics that is conflated to a stylised aesthetic which cannot help but advertise a patronising spectacle. Mehta tries to use the dulling allegory of the mountain to address caste politics but seems unable to keep at bay a hyperbolic attachment to stereotypical visions of conventional romantic imaginings.

The legacy of Parallel Cinema is unmistakably signposted in the film through the subplot of the despotic landlord and subjugated peasants in the village that forms a major backdrop to the film. This subplot is later inverted when the action shifts to the 1960s and the Naxalites sweep through the village, hanging the landlord in a moment of violent insurrection. Such an indescribably political moment that in fact ends in the massacre of all parties in a shootout is an authorial marker of Mehta. Naxalism is a thematic historical thread that runs through many of the political works of Parallel Cinema, and is a relatively unexplored one. While the casting of Nawazuddin seems all but obvious given his current indie status, justifiably so, Mehta is unsure what kind of film he wants this to be. I would have preferred it to remain a character study but Mehta is obligated take on the ‘extraordinariness’ of the true story of Manjhi by attempting comprehensiveness, a noble but self defeating position.

In terms of film style, Mehta’s has always shown an ability to draw in ideas from painting, theatre and mythology to create a complicated mode of address. Manjhi feels most like a broad example of magical realism, inconsistently so. Mehta finishes with acknowledgments to the real Manjhi and his family and although one is reminded of the ideological significance of the story, it also makes one realise that this project worked far more successfully as a documentary. Why? Because if this story about caste oppression, a perpetual one, then the metonymy of the mountain does explicate a troubled past and present, but it somewhat dislodges the authentic, real voices of the lower caste.

Mehta takes a more populist approach to the story of Manjhi as it seems to have been retold in many different ways now, so by approaching the story from a popular front perspective makes the politics palatable for a wider audience. Nonetheless, the theme of caste oppression does still come through, and while Mehta may not as be erudite as he once was, he continues to make films on relatively on his own terms. Conclusively, one could argue Mehta deliberately steered away from opting for despair and the celebratory tone the film strikes at the end is a little fantastical, perhaps unhelpfully reducing Manjhi to a symbol. Furthermore, the main reason why Manjhi carved a road out of the mountain is because he wanted to make it much easier for villagers to get access to medical assistance. Mehta obscures this fact, allegorising Manjhi’s herculean efforts, and also somewhat depoliticising the narrative. Mehta’s melodramatic re-telling of Manjhi’s almost legendary, mythical story is still worth seeking out.