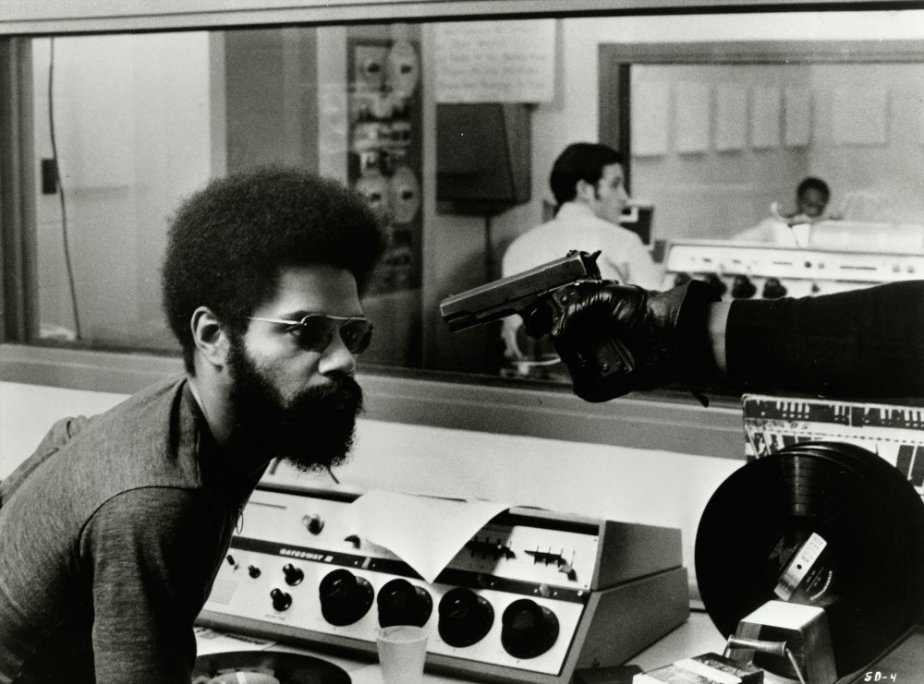 The high point of Blaxploitation political radicalism is commonly signposted with Melvin Van Peebles groundbreaking film – ‘Sweetback’. When considering the limitations of Blaxploitation cinema, the seminal nature of Peebles film should in no way exclusively act as the definitive reference point for the radicalism of the era or black cinema. Released in 1973, The Spook who sat by the door falls under the auspice of Blaxploitation but the political reality with which it dealt, that of black militancy and anti establishment ideology, is an aspect that most films avoided in fear of commercial alienation and criticism from the white establishment. The claim that Blaxploitation offered new ways of representing what it meant to be black in America seems like another liberal oversight considering how many of these films perpetuated a fantasy urban image of a black anti-hero. Many of these so called Blaxploitation films did little to further the political cause of the black communities in America as many of the films were financed by the major studios in a deliberate and premature attempt to cash in on the emergence of a new black audience. With Blaxploitation, the difficulty with articulating a differing ideological perspective, one which was as fiercely radical and uncompromising as that of the values of black revolutionaries, remained worryingly absent from mainstream cinema.

Black actor and film maker, Ivan Dixon’s second film as a director, The Spook who sat by the door, makes for provocative and highly charged viewing today. Yet the explicit political sympathy it shows with the ideology of black militancy and its centrality within the black community as a force of real change continues to be largely responsible for its relative obscurity and marginal status. Written by Chicago based black activist Sam Greenlee, ‘The Spook who sat by the door’, was published in 1968. Greenlee served as a foreign services officer with the US Information Agency between 1954 and 1957. Though his first novel was a work of fiction, it undoubtedly reflected his own personal experience (and perhaps the discrimination he faced) working for an extension of the white establishment. Co-adapted by Greenlee for the screen (he also acted as one of the producers alongside Ivan Dixon), the novel like the film follows the journey of black CIA agent Dan Freeman who uses his training and skills to create a popular black uprising in the deprived ghetto of Chicago.

Post 68, America had been traumatised by a wave of political assassinations including that of Martin Luther King and Malcolm X. The death of the civil rights movement and the political gap left by the absence of aspiring leaders brought about a period of disillusionment. The reactionary, armed struggle and brand of empowering black militancy advocated by Marxist groups like The Black Panthers questioned the pacifist approach taken by the civil rights activists as somewhat abortive in achieving the ultimate objective of political, social and economic independence and freedom. Rejecting the non-violent ideologies of Martin Luther, black militancy argued that for real change and progress to take place in the black communities it would need to emerge from a collective and somewhat revolutionary attitude towards the oppression of the white establishment.

A handful of films were able to channel such anxieties including the much dismissed and misinterpreted 1973 film, The Spook who sat by the door. The financing for the project came from wealthy black members of the Chicago community whilst Ivan Dixon’s credentials as a black actor and competent director of TV shows secured a distribution deal with United Artists who also agreed to contribute the final share of the budget. On this basis alone, one could argue that Dixon’s film is an independent feature, made outside the sphere of studio interference and described by Greenlee as ‘guerrilla’ film making. Dixon had promised United Artists another blaxploitation film in the vein of his directorial debut Trouble Man but the finished film enraged the studio who gave it a truncated release. Ivan Dixon started his Hollywood career acting as an uncredited student double for Sidney Poitier on The Defiant Ones. Eventually shifting into television, recognition came with Nothing but a Man, an independent film for which he received critical acclaim in the lead role.

Dixon spent much of his career directing apolitical television shows, much of which he has openly criticised as insignificant. His career after The Spook who sat by the door seemed to stall; Dixon accused the FBI of making it difficult for him to find work – his inflammatory political ideals did not go down well with the wider conservative elements of the white establishment. I think the staunch resistance Dixon faced from United Artists when it came to distribution and the suppression of the final film galvanised a mind set which confirmed that it was possible to make a political film but virtually impossible to get it distributed. I suspect this is what largely prevented Dixon from continuing his engagement with political film making. He tried but had failed at subverting the system.

What makes The Spook who sat by the door fascinating viewing today is the film’s uncompromising approach in detailing the ideology of black militancy – the idea of an armed struggle is something that we actually witness and take place in the film. Perhaps the major criticism with the film is Dixon’s over reliance on the trappings of the blaxploitation film – one can see clear evidence throughout of Dixon’s anxiety with making a film that would potentially limit the commercial prospects. Upon the rigorous recruitment procedure, Dan Freeman (Lawrence Cook) is hired to be the CIA’s first black agent and immediately given a redundant, powerless and token desk job. In the sequences in which Freeman interacts with the white establishment, Dixon mocks the Uncle Tom stereotype as our protagonist acts submissively, politely following orders and maintaining his subservient position as the CIA’s pathetic symbol of liberalism.

Though his time at the CIA is a humiliating one, Freeman’s infiltration proves to be worthwhile as he puts to work his skills and knowledge as an agent to instigate a political revolt in his own community. He recruits a mixture of naïve community activists and politicised revolutionaries, teaching them how political resistance must be determined by acts of violent retaliation – he inevitably attracts the support and even consent of the local community who rally around the group’s radical oppositional thinking. For me, this was the most surprising aspect of the film. Unlike most films in which the revolutionary or radical is eventually captured, imprisoned and killed, the ending sees Freeman very much in control of the revolution and prepared to go to any lengths to ensure it achieves the purpose of political emancipation – the CIA and FBI are unable to repress Freeman as he uses their ideas of guerrilla warfare as a weapon against them. The irony here is simply devastating.

Ivan Dixon’s film seems to be a missing link between the work of black film makers in the 1970s and the confrontational politics of a contemporary black film maker like Spike Lee.