The title for Raj Kapoor’s 1955 film Shree 420 takes its social inspiration from the Indian Penal Code. Section 420 deals with cases of fraud and cheating yet it’s popularisation by Raj Kapoor has meant it has become ubiquitous with the figure of the con-man or trickster in Indian cinema. It seems as though Coca-Cola first entered the Indian market after the push for modernity and industrialisation as implemented by Nehruite politics in the late forties and early fifties. The history of Coca-Cola in India is a shameful one and it continues to face a barrage of criticisms for its unfair extraction of water, workforce exploitation and use of pesticides in the bottling of drinks. Basically, most of these crimes are characteristic of such a hegemonic multi national corporation like Coca-Cola that relies on brand recognition and promotion to mask its lack of due care for communities and livelihoods of people. Perhaps it is a little hypocritical of film stars like Aamir Khan and other A listers to promulgate messages of social revolution and political intervention in films such as Rang De Basanti (perhaps contested further in Peepli Live) when in reality their own political ideals are compromised by consumerist obligations, endorsing certain brand products and doing so without a hint of remorse.

You’re probably thinking what bearing does Coca-Cola have on a film directed by Raj Kapoor released way back in 1955? Well, interestingly, whilst many of the studio films produced in the 40s and 50s were characterised by their escapist and populist sentiments, residing beneath the subtext was a mass of potentially relevant and contradictory ideological discourses articulating the shared authorial concerns of director Raj Kapoor and writer K.A Abbas. Shree 420 is simplistic in its representation of the conflict between classes and whilst Raj wins out at the end for the common man, throughout the film’s melodramatic narrative, K.A. Abbas offers some subtle ideological commentary on the impact modernity was having on the urban space just as Nehru’s vision for progressive change was accelerating.

When Raj first enters the city of Bombay, his figure is framed by the hoarding of a coca-cola sign which becomes a swipe at consumerism that was beginning to infiltrate the cosmetics of the urban city. 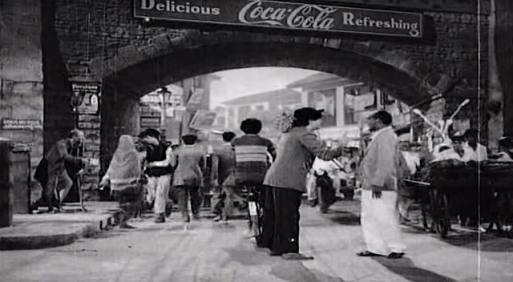 Ideologically, the motif of the Coca-Cola sign reemerges again only moments later when Raj offers a street kid a banana – the juxtaposition between the harsh poverty of the slums and the Utopian fantasising of corporate branding is underlined by the language on display – ‘Delicious’ and ‘Refreshing’ says the sign whilst beneath we are confronted with stark imagery of the dispossessed; a ruthless exposition of Nehru’s idealism. 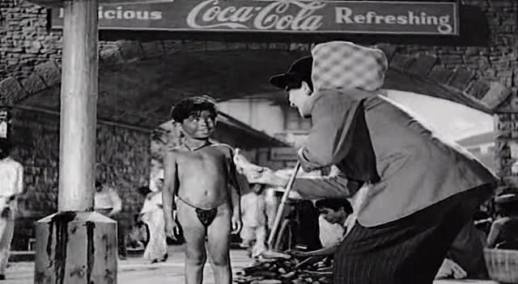 However, the swipe at Coca-Cola consumerist ideology doesn’t stop right there. Once Raj pawns the award he is carrying with him (a definite nod to Bicycle Thieves), the money which he intends to put to good use is immediately stolen from him when he indulges in a game of cards on the streets. His first encounter with the cynicism and corrupting value of the city is framed with yet another Coca-Cola advertisement on the wall which this time is ironically selling the drink through the word ‘hospitality’.

Later on in the film when Raj finally achieves success, as false and shallow as it is, director Raj Kapoor makes use of a startling subjective point of view with the outstretched hands holding the money. Not only does this shot contrast quite starkly with the rest of the film in terms of its bold and symbolic framing but it repeats a similar vein of expressionism from an earlier film, Awaara. In many ways, like the Coca-Cola brand that craves consumer acknowledgement, so does equally the desire for Raj to acquire social status.

I want to finish with a quote from film academic Robin Wood as I too at times can be very dismissive of mainstream populist cinema as merely entertainment yet lurking beneath some films are a set of contesting ideologies which at times can prove to be radically more challenging than those so called political works of cinema:

‘One of the functions of the concept of entertainment by definition, that which we don’t take seriously, or think about much (It’s only entertainment) is to act as a kind of partial sleep of consciousness. For the filmmakers as well as for the audience, full awareness stops at the level of plot, action, and character, in which the most dangerous and subversive implications can disguise themselves and escape detection. This is why seemingly innocuous genre movies can be far more radical and fundamentally undermining than works of conscious social criticism, which must always concern themselves with the possibility of reforming aspects of a social system whose basic rightness must not be challenged. The old tendency to dismiss the Hollywood cinema as escapist always defined escape merely negatively as escape from, but escape logically must also be escape to. Dreams are also escapes, from the unresolved tensions of our lives into fantasies. Yet the fantasies are not meaningless; they can represent attempts to resolve those tensions in more radical ways than our consciousness can countenance.’

Robin Wood, The American Nightmare: Horror in the 70s, from Hollywood from Vietnam to Reagan (New York, Columbia University Press, 1986)