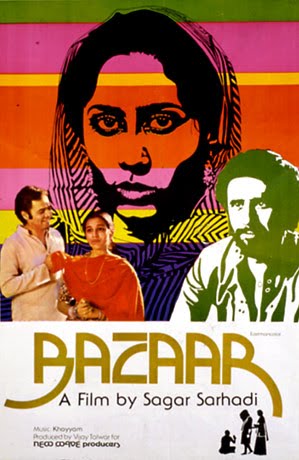 My initial and largely superficial perceptions of Bazaar led me to assume from the stellar New Indian cinema cast of Smita Patel, Naseeruddin Shah and Farooq Sheikh that this was going to be yet another film which would categorically fall under the auspices of Parallel cinema. However, a closer inspection suggests otherwise as the director behind the film, Sagar Sarhadi, a renowned scriptwriter, only directed one film in a career that started in the 70s. I’m not so sure why Sarhadi only ever made one feature film given his prominence but I wonder if Sarhadi having worked on so many commercially successful romantic melodramas felt he could almost do a better job. In many respects he does succeed if one compares Bazaar to hyperbolic musical fantasies like Kabhi Kabhie (1976) and Chandni (1989). Both the dialogue for Kabhi Kabhie and Silsila were penned by Sarhadi but unlike a mainstream director like Yash Chopra and excellent one at that who tended to reject realism, Sarhadi with Bazaar attempts to merge certain aspects of parallel cinema with mainstream commercial cinema – the result is a largely uneven but still intriguing attempt at the female melodrama or woman’s film. I guess the difference is that when compared to the Yash Chopra films, the narrative was generally driven by the actions of the male lead and whilst many of these films also accommodated the point of view of the woman caught up in such fraught middle class relationships, it was the male figure of Amitabh who dominated.

With Bazaar, this is reversed to some extent by making Smita Patel central to the narrative action and the male characters more peripheral, recalling respectively both the female melodramas of Bimal Roy and Hrishikesh Mukherjee. Whilst Shabana Azmi was a more intense actress, her nearest counterpart and rival Smita Patel’s repertoire was far greater and this made her a much stronger performer of the two. In addition, Smita Patel was more successful in alternating between the mainstream and independent cinema because her classical looks recalled the famous studio stars like Waheeda Rehman and Meena Kumari, allowing audiences to accept her more easily in conventional roles. Thematically, the film does have a strong socialist slant and most prominent is the issue of gender exploitation. The story follows Najma (Smita Patel), a Muslim girl who by eloping with a man much older than her has transgressed the laws of patriarchal religious culture. Najma effectively becomes a slave to Akhtar (Bharat Kapoor) who refuses to marry her until he has sought approval from his family. In essence, Akhtar turns Najma into a possession which he uses to fulfil his own personal ends.

The closing shots to Bazaar dissolves the fourth wall as Smita Patel and Naseeruddin Shah turn to gaze directly back at the audience.

Director Sarhadi is very critical of Muslim culture and interprets the tradition of arranged marriage merely as an economic one in which young girls are bought and sold in a symbolic marketplace governed by religious and social laws. The point is well illustrated in the story of two young lovers (played by Supriya Pathak and Farooq Sheikh) who cannot be together simply because poverty discriminates against them. Ironically, it is poverty which actually becomes a barrier to them being married, not religious dogma or social identity. Ideologically, Bazaar makes a fascinating and worthy companion piece to director Shyam Benegal’s Mandi (1983), another film that features Smita Patel and Naseeruddin Shah and also deals with prostitution, femininity and women as a capitalist commodity. It is difficult to say if Bazaar would fall into the parallel cinema category but the use of Khayam’s music and Sarhadi’s overwrought direction does at times make it feel like a conventional Hindi melodrama. However, one could argue that the film’s claim to be considered as part of the parallel cinema collective would rest largely on the closing shots in which Sarhadi dissolves the fourth wall and implicates the viewer in the cycle of victimisation and exploitation – it is a chilling and bold moment, perhaps the most audacious in the entire film.