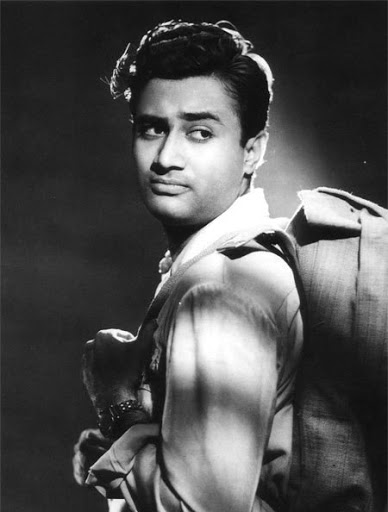 Dev Anand in one of his many publicity poses – one of the overlooked stars of 50s Hindi cinema.

Trapped amongst the ideological sincerities of Dilip Kumar, Raj Kapoor and Guru Dutt was Dev Anand – the suave, sardonic and gentlest of screen heroes who came closest to perfecting the charismatic yet unpredictable persona of Hollywood noir film stars like John Garfield. It was in 1949 that the Anand brothers got together, establishing Navketan Films, an independent production company. Between the creatively enriching period beginning in 1952 with Afsar and reaching its artistic zenith in 1965 with Guide, Navketan helped ttransform Dev Anand into one of the most popular Indian film stars of the 1950s whilst offering a slew of great films which attempted to and largely succeeded on occasions to bridge the sacred gap between art and commerce. The Anand brothers were comprised of Chetan, Dev and Vijay. Chetan Anand, the eldest, was also the most political and his deep ideological involvement with IPTA during and after partition led to him directing one of the earliest examples of an emerging social realist style imported from theatre. The film in question was none other than Neecha Nagar, the first Indian film to be screened at Cannes and the first to win a prize. It’s not surprising that Chetan’s strong socialist beliefs would leave a lasting impact on both Dev and Vijay Anand.

Released in 1954, Taxi Driver, is perhaps their best known film of the 50s period and whilst it takes much of its aesthetic influences from film noir, the combination of all three brothers – Chetan as director, Vijay as writer and Dev as main lead produced a semi realist tale about the proletarian imprisoned in a new urban dystopia of broken dreams and class divisions. In principle the vision of the city as a hostile landscape in which the anti-hero (though romantically inclined) must struggle to preserve his moral integrity was shared amongst many of the major film makers of the era including Guru Dutt, Bimal Roy, Raj Kapoor and Zia Sarhadi. The accents of the angry young man as personified by the Vijay persona of Amitabh can be traced directly back to films such as Awaara, Boot Polish and Taxi Driver in which the proletarian must come to terms with his lowly position within the grand scheme of things. In many ways, the repeated thematic pronunciations of the family coming under attack and the corruption of the innocent rural woman was common place in the narratives of melodramas, indicating strongly popular cinema’s subservience to the ordinary dilemmas that plagued the mainstream.

Dev Anand as the hero in Taxi Driver (1954) with comic actor Johnny Walker.

Here is one of the cabaret noir style song and dance numbers from the film, performed by the femme fatale:

Taxi Driver came about as an economic necessity rather than a committed political dictat. With Navketan under pressure to deliver a hit after two consecutive commercial disappointments, Taxi Driver was quickly put together and shot on a low budget almost entirely on the streets of Mumbai. Released in 1954, the film was a resounding success story with audiences and seemed to continue an interest in film noir first initiated with Baazi in 1951 which was directed by Guru Dutt, one of Dev Anand’s many exciting discoveries. Interestingly, the period between 1949 and 1965 is generally considered to be one of the richest creative periods in the history of Indian cinema, explaining why Navketan flourished in generating new cinematic ideas. Hailing from Punjab, Dev Anand started his career as an arts graduate at the University of Lahore before making the decisive journey to Bombay. Alternating between his own production company and the illustrious and commercially successful Bombay based Filmistan Studios, Dev Anand cultivated a gentler and more romantic persona than those of his contemporaries like Guru Dutt who embraced a vein of fatalism and tragedy. Mixing comedy with heroism and largely rejecting the Devdas complex, Dev Anand’s naturalistic approach can still be detected today in contemporary Indian film stars including Akshay Kumar, Shah Rukh Khan and Salman Khan; in many ways along with Shammi Kapoor it has strangely become the dominant star persona, though few would like to admit so preferring to point unashamedly to both Amitabh and Dilip Kumar.

Chetan Anand’s directorial debut Neecha Nagar (Lowly City) was released in the same year as its counterpart Dharti Ke Lal, directed by K A Abbas, another advocate of the IPTA cause. It is important to bear in mind that Chetan Anand later broke away from Navketan citing creative differences only to re-emerge after an extended hiatus in 1965 with the seminal war film Haqeeqat. Whilst Dharti Ke Lal was an official IPTA production, Neecha Nagar aligned itself more with a Gandhian ideology of passive resistance. Director Chetan Anand had in fact left the IPTA before embarking on Neecha Nagar, criticising the organisation for exploiting its position to propagate leftist dogma. Film critic and journalist Rajiv Vijayakar offers a detailed overview of Chetan Anand’s career in his piece for Screen India. Inspired rather than based on Maxim Gorky’s The Lower Depths, Neecha Nagar represents an almost dystopian vision of Indian society in which rampant class divisions are extenuated by the clear geographical demarcations that exist between the wealthy, ruling elite who reside in the mountains and the poor, oppressed workers in the lowly city below. Such an acute political and economic dichotomy echoes that of Lang’s Metropolis. Similarly the figure of the corrupt industrialist despot attempts to placate the worker’s revolt, buying influence and openly breeding disunity. A thematic recurrence of the rural village as a place of utopian socialist ideals struggling to counter the corrupting weight of modernity would eventually become a defining ideological characteristic of the Hindi realist melodrama. 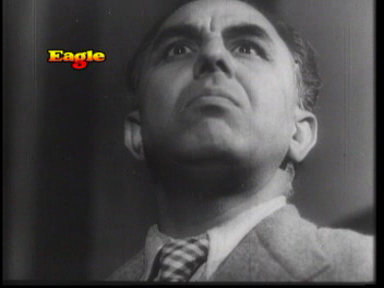 The despotic landowner is indifferent to the concerns of the poor villagers.

The leader of the village revolt and voice of the oppressed.

The story of Neecha Nagar sees the landowner, representing the forces of elitism, approve of and build a sewage system that cuts through the village of the poor oppressed farmers. Indifferent to their plight, the sewage corrupts the water supply, destroys the crops and spreads disease leading to a shallow attempt on behalf of the landowner to construct a hasty makeshift hospital offering free treatment to the sick. The politicised face of the villagers represented in a secular and transparent manner view the hospital as yet another extension of the landowner’s hegemonic grasp and openly instruct all of the villagers to resist by refusing free treatment. For the hard liners of the village, to get treatment and use the hospital would in fact be giving into the rule of the wealthy elite. It is a defiant stance and one that claims a number of emotional sacrifices but most significantly it develops into a resistance openly rejecting violence and relying on dissent. Whilst the film does feature some songs and dance sequences with music by Ravi Shankar, the raw aesthetics offer one of the most striking examples of early neo realism. Interestingly, Neecha Nagar’s achievements at Cannes were shared amongst a number of films including Rossellini’s Rome, Open City – both films were fashioned on similar humanist sensibilities.

However, the cinematography of Neecha Nagar articulates expressionism imported from German cinema which is very much absent from Rossellini’s historically determined canvas. In a way the expressionistic vein jeopardises the validity of the realist agenda so emphatically stated through the overt political symbolism of the ideologically sentimental characterisation. Despite the criticisms concerning expressionism and realism invoked by Chetan Anand, a third and perhaps more pertinent stylistic tendency emerges in the form of documentary. This may in fact be the common link between Rome, Open City and Neecha Nagar as they both claim to be realist texts because there are sacred moments when both films blur the line between fiction and reality reminding us of an actuality being embraced. Take for example the moment in Neecha Nagar when the villagers realise the landowner has cut off the only clean water supply to the village. A montage is used, documenting the gaunt figures of the poor villagers – we know these are not actors but real people who are photographed without any sense of romanticism. Their existence in neo realism terms is declared by their perpetual gaze and marginal status – rendering them visible makes them doubly political. The ideologue of Mrinal Sen, Ritwik Ghatak, Satyajit Ray were all formed in the spirit of such moments and it is not hard to see why Neecha Nagar continues to occupy such a privileged position in the realist trend that would only really come to fruition in the 1950s and beyond.

Here is a fantastic interview with Dev Anand who talks at length about his illustrious and at times brilliant career: