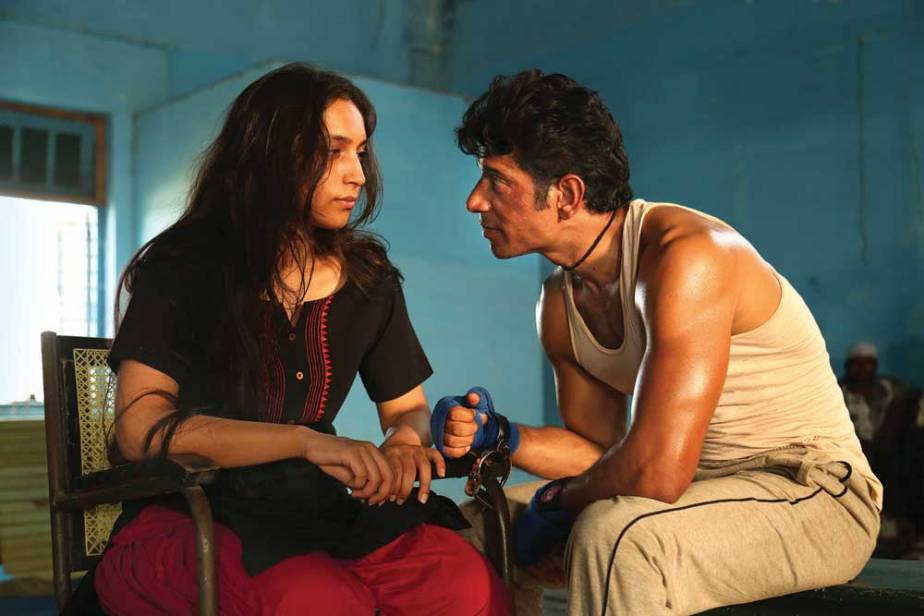 Mukkabaaz ends with very little of the catharsis you would expect from a boxing biopic. But Kashyap’s latest venture uses the sports film trappings as a way of navigating the politics of caste against the backdrop of an unconventional Hindi romance. This one zips along, partaking a breathless, infectious energy and enjoys circumventing audience expectations so to let those authorial Kashyap flourishes gather a hedonistic momentum.

While mainstream Hindi cinema continues to dodge the question of caste, having rendered caste invisible in the sentimental NRI neoliberal narratives, Parallel Cinema attempted to make the question of caste a central edict of the communicative political cinema of Benegal. Some time or another many of the great Indian filmmakers have all dealt with caste. Even Ray realised the urgency of this task with Sadgati, his grimmest film. And many of the best films about caste have come from the South; see Chomana Dudi. While alternative, independent cinema has thrived, caste led narratives have been intermittent. Yet the critical success of films like Sairat, Chauranga and Masaan point to a cycle of films that deal with caste head on, and so Mukkabaaz in some respects can be situated in this cycle. But what seems to separate Mukkabaaz from these films is the political address; much of it on the nose politics, which is openly critical of Modi’s polarized, nationalist rhetoric that has claimed the lives of many innocent Indians.

One gets a sense of urgency from this work that has been lacking in the past because it feels like a film that Kashyap had to make – but not to silence his critics or to stage a pithy comeback, rather to finally put his neck on the line in ways that become amplified in the coruscating tale of caste subjugation. Not that Kashyap has ever put his neck on the line before; he does it all the time on social media and usually gets it chopped off! Kashyap has been bumping up against mainstream Hindi cinema for a while now, often with mixed results; see Bombay Velvet. With Mukkabaaz Kashyap manages to pull off such a creative feat, freely mixing the idioms of 70s storytelling with the postmodern Hindie panache of hyper-edit montages and monolithic super villains. Kashyap has always been a tactile filmmaker and with Mukkabaaz he once again conveys a naturalistic feel for the urban environment and particularly the spaces the characters inhabit. The juxtaposition of blood, sweat and skin gives the film a tangible ambiance that seeps through into the unconventional romance.

Where the film really comes to life ideologically is when Ravi Kishen shows up as the Dalit boxing coach and in one particular initial exchange with Jimmy Shergil’s upper caste despotic, bigoted Bhagwan, a crippling social reality transforms boxing into a metaphorical caste struggle that energises the narrative. An attempt to depart from the conventional romance is at the level of caste but the decision to make Sunaina (Zoya Hussain) mute heralds a palpable symbolic gesture to do with patriarchy and female oppression. Moreover, muteness becomes a device with which to create lots of humour and arguably Mukkabaaz is also one of Kashyap’s wittiest films. Perhaps one of the darkest moments is when Shravan (Vineet Kumar Singh) humiliates his boss in the workplace, overturning a caste hierarchy and privilege that seeks to disenfranchise further those already on the margins.

Most of Kashyap’s films never follow any set rules in terms of narrative storytelling and often function episodically, rarely building to a traditional sense of closure. And given the emotional catharsis often associated with boxing films, much of this is kept in check so not to sentimentalise Shravan’s epic struggle. But there are deliberate moments of hyperbole such as Shravan’s rescue of Sunaina, a brilliant send up of Bollywood’s deference to the mythological, and which Kashyap pulls off with chaotic aplomb. Indeed, such hyperbole also stretches to the sordid degrees of corruption prevalent in society, one in which the film paints a nexus of the upper caste, the police and public institutions working in cahoots, a major characteristic of popular Hindi cinema in the 70s.

Undeniably this is actor Vineet Kumar Singh’s film and he rumbles and contorts his way through, his sculpted body instrumentalized to mirror a razor sharp determination that claws into the warped psyche of a nation that seems to have yielded to a neo-fascist impulse. But what to make of the final invocation of ‘Bharat Mata Ki Jai’? It seems to be yet another rejoinder, delivered in a tone of mockery. Nevertheless, I still felt some ambivalence towards this moment since I didn’t fully comprehend the intentions. I should also mention the final shot is a brilliant one that crackles with mischievous delight.