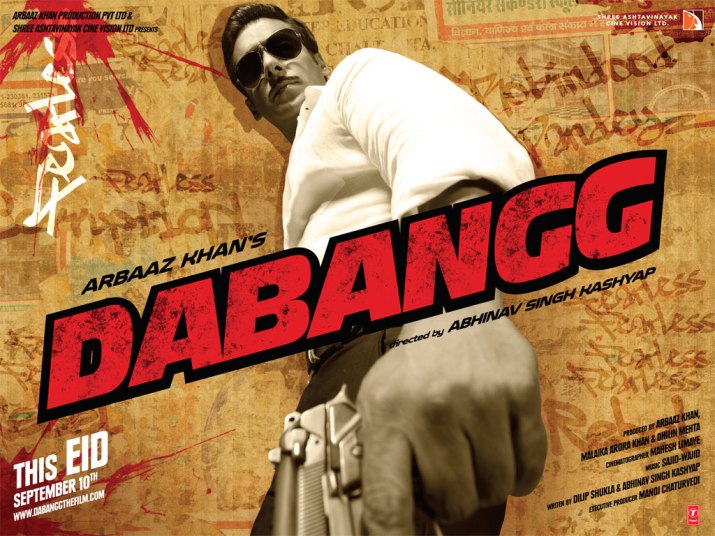 Before I begin I have a little confession to make. I have never really been a big fan of Salman Khan’s work. His refusal to take cinema and film seriously has led to a perpetual state of mockery. Unlike the radical transformation of Aamir Khan who also entered the industry as a poster boy, Salman’s star image has remained more or less constant. Whilst Shah Rukh Khan’s box office magnetism resides in the overseas markets with the NRI audience, Salman Khan is perhaps a bigger indigenous film star. Yet for all his star power, unlike his contemporary rivals including Aamir Khan and Shah Rukh Khan, he has been reluctant to branch out into the field of socially sincere cinema. He continues to make bland, formulaic and sorely mediocre films with many expressing a terrible streak of nepotism. I have to be honest, I can’t remember the last Salman Khan film I saw in cinema. However, the flashy trailers for his latest venture Dabangg certainly raised my interest in Sallu’s retro pencil thin moustache. Directed by Abhinav Kashyap, the brother of talented film maker Anurag Kashyap, and produced by Arbaaz Khan (brother of Salman), Dabangg has for the past week been busy breaking box office records in India. The context in which one watches a certain film can at times shape our initial reception and with the hype surrounding Dabangg, it would be foolish to discount the effect such commercial euphoria has had on the viewing experience. Dabangg is certainly not the best Indian film of the year nor is it the worst but it highlights a prescient point on stardom and its relationship with Indian cinema and the audiences which exist for such films.

Ever since high concept cinema emerged in the eighties, the value of the Hollywood film star in particular has diminished at the box office. Stars have become increasingly irrelevant to mainstream Hollywood film making and whilst the likes of Will Smith and Sandra Bullock can still be considered bankable stars, Katzenberg’s notion that ‘idea is king’ has become a veritable manifesto for many film producers. Dabangg borrows liberally from the playful post-modern aesthetics of a film like Kung Fu Hustle whilst repeating familiar melodramatic tropes. Yet for all its overt stylisation it is the presence of a film star like Salman Khan that suggests Indian cinema continues to depend, thankfully that is, on a plethora of stars. Whilst this may bring charges of an elitist and hegemonic power block ruling the box office, stars and their relationship with fans has always been a central part of the glamorous and alluring appeal of cinema. Salman’s introduction in Dabangg as the affable ‘Robin Hood’ Chulbul Pandey which is signposted with deliberate aplomb raised rounds of applause and impromptu cheering in the cinema audience. Having seen so many of the Hollywood summer films this year when ever a star appeared on screen the sedate audience did not bat an eyelid. I’m guessing the audience reaction to Salman’s entry in cinemas including Mumbai and New Delhi has been positively riotous. Dabangg may not be a brilliant film but it proves an important point – that though Salman Khan may be an average actor at best and makes mediocre films he is above all a star.